Onewheel Riders Build Community While Floating Through the Region’s Streets 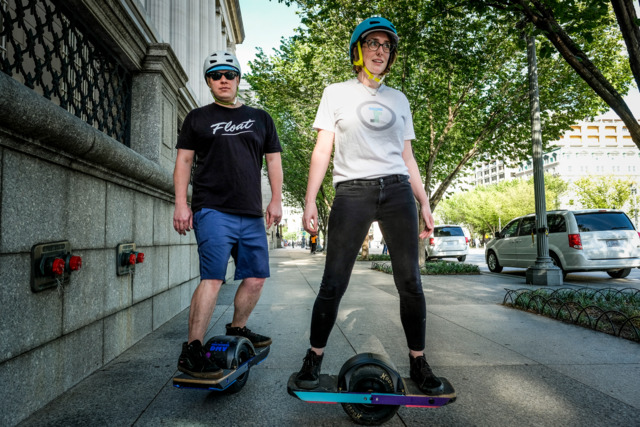 “I was just like, what is this magical vehicle, and how do I get one?”

As Chris Jacques’ first wedding anniversary with his wife, Emily Jacques, approached in 2017, he wanted to get her something special. So he dropped $1,000 on an object he hoped would bring her as much joy as it had brought him: a Onewheel.

At first, Emily wasn’t sure the device—a skateboard-like electric vehicle with a large wheel in the middle—would be her thing.

“I was like, ‘Oh god, I know this thing brings him so much joy, and I’m gonna have to figure out how to use it, because he invested in one for me,’” she recalls.

But a few rides later, it was clear to Emily that Onewheel would absolutely be her thing.

Chris first heard about Onewheel in 2014, when inventor Kyle Doerksen was promoting his new invention through a Kickstarter campaign.

“I was just like, what is this magical vehicle, and how do I get one?” says Chris, who lives in Kensington.

Due to the four-figure price tag, he didn’t purchase his own board until 2016. He was instantly hooked, and started looking for others just as fascinated by the vehicle as he was. His search led him to two Facebook groups, a massive one for Onewheel owners around the world, and a smaller one for riders located in D.C. After becoming heavily involved in the latter, he eventually became its leader.

Today, his “DMV OneWheel Riders” group has approximately 350 members. He estimates that 75 percent of members are actually located in the D.C. area, while the rest are Onewheelers from places like Delaware, Texas, and West Virginia who’ve joined when visiting D.C.