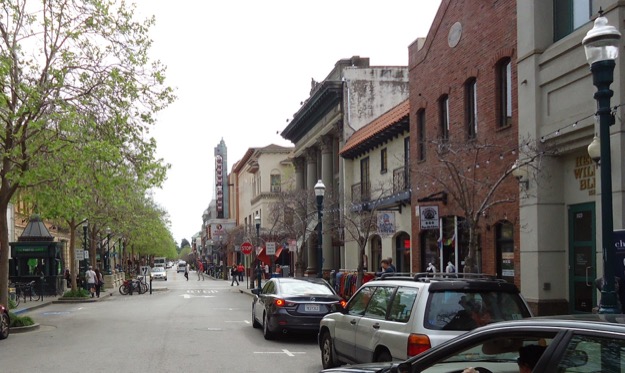 The requirement that all telecoms companies be treated that same only applies while facilities are being installed. Cities are free to adopt wireless-specific ordinances that apply after construction work is completed.

Its interpretation goes beyond lower court decisions and adopts a narrower view of state-level restrictions on municipal control of telecommunications infrastructure. The unanimous opinion also opened the door to further regulation of cell sites and other telecoms facilities – wired or wireless – by drawing a line between specific limits the legislature put on local oversight of construction activities, and the general ability of cities to set standards for the appearance, placement and, potentially, other aspects of wireless equipment after it’s built.

This authority is important for cities, such as Santa Cruz, that try to manage the look and feel of public spaces and have a tradition of active community involvement in those kinds of decisions.

Last year, for example, the City of Santa Cruz signed an agreement with Crown Castle, a wireless infrastructure company that builds and operates cell sites for mobile carriers like Verizon and AT&T. Under that contract, Crown Castle can install “small cell facilities” on city-owned poles, at a cost of $1,500 per pole, per year. Santa Cruz’s ability to negotiate acceptable terms is partly based on its authority to regulate the location and appearance of equipment that private companies install in the public right of way. For example, Crown Castle is limited to two antennas per pole and has to have small cell designs approved by the city, with particular consideration for “historic or decorative” poles, and poles in the downtown area. If electric and telecoms lines in a given neighborhood run underground, instead of on utility poles, then Crown Castle likewise has to install its equipment underground (except for antennas, of course – those need to be on poles).

An earlier appellate court decision ruled that cities can set aesthetic standards for wireless facilities because 1. section 7901 of the California public utilities code says telecoms infrastructure can’t “incommode the public use of the road or highway”, and 2. the visual impact of ugly equipment falls within the dictionary definition of incommoding.

Neither the plain language of [public utilities code] section 7901 nor the manner in which it has been interpreted by courts and the PUC supports plaintiffs’ argument that the Legislature intended to preempt local regulation based on aesthetic considerations. The statute and the ordinance can operate in harmony. Section 7901 ensures that telephone companies are not required to obtain a local franchise, while the [San Francisco] Ordinance ensures that lines and equipment will not unreasonably incommode public road use.

But municipal authority goes beyond that, according to the Supreme Court. The ruling said that state law only restricts some of the broad discretion and power that cities have under the California constitution. Cities can’t effectively prohibit telecoms companies from building infrastructure or regulate their operations, but…

The Legislature has not adopted a comprehensive regulatory scheme. Instead, it has taken the limited step of guaranteeing that telephone corporations need not secure a local franchise to operate in the state or to construct local lines and equipment. Moreover, the statute leaves room for additional local action and there are significant local interests relating to road use that may vary by jurisdiction.

Nor does the authority given to the CPUC override local control or responsibilities. The commission regulates “a utility’s relations with its customers”, the decision says, but municipalities “are forbidden from yielding to the PUC their police powers to protect the public from the adverse impacts of utilities operations”…

Consistent with these statutes, the PUC’s default policy is one of deference to municipalities in matters concerning the design and location of wireless facilities. In a 1996 opinion adopting the general order governing wireless facility construction, the PUC states the general order “recognize[s] that primary authority regarding cell siting issues should continue to be deferred to local authorities… . The [PUC’s] role continues to be that of the agency of last resort, intervening only when a utility contends that local actions impede statewide goals … .” The order itself “acknowledges that local citizens and local government are often in a better position than the [PUC] to measure local impact and to identify alternative sites. Accordingly, the [PUC] will generally defer to local governments to regulate the location and design of cell sites … .”

Finally, the Supreme Court said that public utilities code section 7901.1, which puts specific limits on local control of the public right of way, only applies while construction work is going on…

It is eminently reasonable that a local government may: (1) control the time, place, and manner of temporary access to public roads during construction of equipment facilities; and (2) regulate other, longer term impacts that might incommode public road use under section 7901. Thus, we hold that section 7901.1 only applies to temporary access during construction and installation of telephone lines and equipment. Because the City treats all entities similarly in that regard, there is no section 7901.1 violation.

In other words, the requirement that all telecoms companies be treated that same only applies while facilities are being installed. Cities are free to adopt wireless-specific ordinances that apply after construction work is completed.

California cities can set aesthetic standards for cell sites, and have more authority over wireless and wireline infrastructure than they or telecoms companies thought. It’s a comprehensive defeat for T-Mobile, Crown Castle and Extenet, who sued the City and County of San Francisco. They’ll even have to pay San Francisco legal costs.

Although the ruling opens the door to further local regulation of wireless facilities, including stricter aesthetic standards, the extent of that discretion wasn’t defined, and there are still federal preemptions of state and local authority that could apply. But the Supreme Court’s decision gives California cities a green light to test those limits.

My clients are mostly California cities, including Santa Cruz and other Monterey Bay Area communities, all of whom are directly affected by this case. I’m not a disinterested commentator. Take it for what it’s worth.