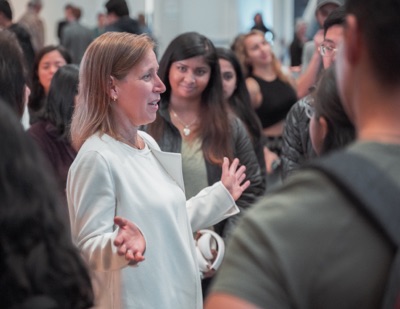 (Photo above: YouTube CEO Susan Wojcicki was surrounded by students after she and her husband, Google product director Dennis Troper, returned to campus on March 16 for a public conversation with Campus Provost and Executive Vice Chancellor Marlene Tromp. Credit: Yunsong Xie)

“Join a great company where you’re going to learn. Be open and willing to do anything that’s asked.” — Susan Wojcicki

Tech titan Susan Wojcicki urged college students to pursue careers of meaning and impact in fields that are growing—and to be flexible and humble as they begin their work lives.

“You don’t have a lot of skills yet. Be flexible,” Wojcicki told a crowd of several hundred, including many students, that gathered in the Colleges 9/10 Multipurpose Room on Saturday morning. “Join a great company where you’re going to learn. Be open and willing to do anything that’s asked.”

That advice was among the gems alumni Wojcicki (M.S., ’93) and her husband Dennis Troper (M.S., ’93) offered during a free-ranging, hour-long conversation with Executive Vice Chancellor Marlene Tromp about their path from the redwoods to the highest echelons of YouTube and Google. Wojcicki and Troper, who directs product management for the wearables division of Google, met on campus as graduate students in the master’s in applied economics program. They married in 1998—one year before Wojcicki joined Google as employee No. 16.

Today, as hugely successful tech leaders and the parents of five children, Wojcicki and Troper have plenty of opportunities to give career advice to college students, and their own kids.

“When our son wanted to work at Pixar, I told him to say, ‘I’ll do anything. I’ll take any job at Pixar,’ ” she said. “Once you’re inside, it’s easier to move around. Learn skills, do a great job, and you’ll be positioned for your next job.”

What’s the world going to look like in 10 years?

One of the most powerful and accomplished women in Silicon Valley, Wojcicki was five months pregnant when she signed on at Google. The internet didn’t exist. “It didn’t seem like a risky decision,” she recalled. “I saw that this is the future.”