Posted on May 19, 2016 by Sara Isenberg in Companies, Featured, Santa Cruz Tech Ecosystem

Taking selfies to the extreme 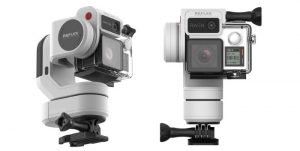 “There are so many selfies out there, but the coolest ones are where someone is doing something crazy like a backflip off a cliff,” said UC Santa Cruz electrical engineering grad student Enes Mentese.

But the wakeboard and snowboard enthusiast found his quest for killer footage took a lot of the fun out of his sports — and often resulted in video that was shaky and out-of-frame.

He decided to use his engineering skills for an ambitious undertaking: creating a robotic camera with a built-in stablization system that attaches to a GoPro and can ride shotgun on the user’s bike, board or helmet.

UC Santa Cruz computer vision grad student Seongdo Kim came on board to develop the software that allows the system to track an object as it moves and changes position, refocusing as needed.

The two have launched Reflex Robotics to commercialize their device. Called the Raven, it mimics the way raptors hone in and track their quarry while flying at top speed.

“If you have to worry about a camera, your attention is divided,” said Mentese. “If you commit 100 percent to the activity while you’re filming, you can do stuff that’s more creative and pushes the sport.”