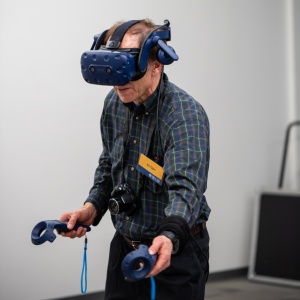 The Baskin School of Engineering at UCSC announced the launch of the country’s first professional master’s degree program in serious games. UCSC already offers two of the most highly rated game degree programs in the country: the B.S. in Computer Game Design and the M.S. in Games and Playable Media, both in the top 20 of Princeton Review’s Top Game Design Schools.

The emphasis on serious games will give students an entry into a field which is expected to grow from $5B to $15B over the next few years, and will capitalize on the school’s existing expertise in assistive technologies, games and playable media, digital art and media, psychology, and many other disciplines.

The degree consists of five academic quarters and trains students in six key areas: game design, game technology, eliciting and integrating subject matter knowledge, designing and conducting efficacy measurements, effective teamwork, and career planning–all within the context of the serious games field. It will culminate in a capstone project. The program’s location in the heart of Silicon Valley and its faculty’s close relationships with industry also will create ample opportunities for students.

The professional master’s programs at the UC Santa Cruz campus are designed to replicate and accelerate the process of learning from experience.

“Our professional programs [the Masters programs in Games & Playable Media and Serious Games] are project-oriented and emulations of professional environments,” Program Director and Teaching Professor Michael John explained. “Each quarter you might make three or four games, and they won’t all be good; actually most of them won’t be good, but the process of building lots of little interactive toys and games is how you learn, and that turns out to be a key skill in the workplace.”

Another key skill for serious games development is presenting one’s work. Attendees of the December 5th 2018 Kraw lecture at the UC Santa Cruz Silicon Valley campus got a triple treat: Roberto Manduchi’s keynote discussing assistive technologies for the blind, and then a double dose of serious games, including some created by the first cohort of serious games students.

Computational media Ph.D. student Jared Duval presented his work on SpokeIt, a game that turns the grueling work of speech rehabilitation for orofacial cleft patients into fun. Stage left were demonstrations of projects-in-progress, set up for the guests to try: these included an unnervingly accurate suicide hotline simulator, a climb up Mount Everest that focused on blood chemistry, a virtual-reality game designed to fix lazy eye, and several language education tools.

Much of the credit for the UC Santa Cruz’s early emphasis on games goes to Professor of Computational Media Jim Whitehead. In 2004, during the post-dot com doldrums, Whitehead created an undergraduate degree that catered to computer science students who wanted experience with computer game development as well as code.

At the time it was one of the only computer game focused programs in the country. Students flocked to the program. During the past decade, banana slug alumni have helped create the latest generation of games. Whitehead sees the same thing happening with serious games.

“There’s a lop of overlap between serious games and more entertainment platforms,” Whitehead said. “They work with the same programming languages, but there are definitely divergence points.”

Those divergence points provide rationale for having two separate programs. “If you’re doing a serious game, there’s some sort of outcome expected, and it’s really important to measure whether you’re getting there or not. So there’s an important assessment component.” Designing games with assessment built in seems like a subtle distinction but often requires an entirely different design philosophy.

The other reason, according to Whitehead, is that the cohorts are quite different.

“What we’re discovering with our first cohort is that they’re just not as into entertainment games as the other students. They’re much more motivated by real-world concerns and there’s value in collecting people like that together so they don’t feel marginalized and so they can exchange information and share their enthusiasm.”

The traditional gaming community can seem clannish and forbidding for outsiders to break into. Serious games, as an entirely new field, represent an amazing opportunity for a much broader segment of the population to apply the tools created for gaming to entirely new problems.

For example, historically, most serious games have focused on education. But the work of Professor of Computational Media Sri Kurniawan has a more tangible focus: health and wellbeing. She sees enormous potential in serious games, particularly for populations with special needs like people with disabilities, from low socioeconomic or educational backgrounds, or the elderly.

“Rehabilitation for a stroke survivor (for example) can be incredibly tedious,” Kurniawan explained. “It can take years of physical and speech therapy to regain function. The appeal of these games is that they can make it more playful and fun: speech therapy can take years, adding instant gratification and high scores can make it much less of a chore and help with compliance and the way people feel about themselves doing it.”

“So many people see the potential of games to do something important,” Melcer said, “but shy away. People think they have to have all this technical knowledge or be a hardcore gamer or some kind of guru to do serious games but we don’t require that. We want people with passion, people who want to do something for their audience.”

Applications for the M.S. in Serious Games are being accepted until January 24, 2019. Please visit https://gpm.soe.ucsc.edu/admissions/ for more information.