Chris Neklason: Getting the Newspaper I Want 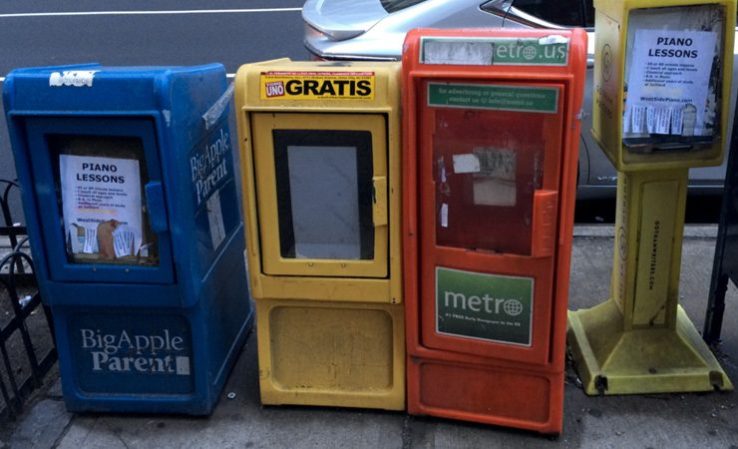 When we first started Cruzio Internet back in the eighties, we were excited by the promise of the emerging new digital communications medium. If everybody was linked through this new network, the old gatekeepers and filters of publishing would be rendered moot! Everyone would have the power of a printing press, a radio and television station at their command!

Thirty some odd years later, yes and no.

From one perspective, this is the golden age of digital publishing. Through blogging and email newsletters, millions of new authors ply their words for a previously unavailable readership. Millions more publish their visual and photo art, and multitudes of talented filmmakers, podcasters, musicians and performers are reaching a vast global audience, sometimes with little more than the camera and mic of their mobile phone.

But over time, the corrosive effects of the advertising and marketing-driven attention economy upon civil society have been revealed, and the rapaciousness of some players in the attention industry have aroused concern.

Consider the current state of the local daily newspaper business: trapped by an obsolete business model under predatory ownership, unable to meet the needs of the community, and oblivious to the rise of its successor on the near horizon.

Our local newspaper is the Santa Cruz County Sentinel. It used to be owned by the McPherson family, but was sold and resold and resold over the years as many local dailies were, until it is now owned by Digital First Media which is itself owned by Alden Global Capital, a hedge fund.

There’s ongoing concern about the water supply here in Santa Cruz County because of the drought cycle. Some years there’s plenty of water, and for long stretches, not enough. As a citizen, I want to know more about the state of the local water supply. How does it work? What’s the plan to keep it working? What’s in play right now? What are the citizen inputs?

This information is collectively “known” to the Santa Cruz County Sentinel reporters who have written stories about the issue over the years, and to various members of the community. But the only way to use the newspaper website to access that collective knowledge is to go to the site search box and enter the word “water” and then read through previous stories which have the word “water” in them. As an alternative, one can pull up an article about “water” and work the “related article” links at the bottom to the same effect.

So after 30 years of Internet, the digital experience of trying to acquire knowledge about a topic through the local newspaper website is the exact same as having to thumb back through a stack of dead tree newspapers.

Newspaper websites are the way they are because it satisfies the customer requirement, and the advertiser is the primary customer in the attention economy.

Attention being a finite resource, advertisers pay a lot of money to capture a slice. All of the innovations of the attention industry are focused on better capturing human attention and better delivering a more effective payload to human eyeballs.

This is touted as “creating a more personalized user experience” and manifests, when I go to Amazon and look at a power saw, as an ad for that power saw thereafter chasing me across every website I visit until I die, and then continuing to harass my descendents.

Meanwhile, my needs as a citizen to understand how something works in my community is represented exactly nowhere in the attention economy.

Compounding the poor fit of that business model with the ongoing mission of local journalism are the interests at play in hedge fund ownership.

Hedge fund ownership considers it a win if the local newspaper folds as long as a large profit over the equity investment is made within an appropriate (short) window of time. This leads to a death spiral of cost reductions leading to a reduction of reporting leading to lower readership until the newspaper dies. The hedge fund will just strip the corpse for parts to sell and move on.

To survive, local journalism needs to make the jump to an alternative business model under alternative ownership.

While much is made of the size and success of the attention economy, one of the more interesting things to come out of the Internet is the rise of the online participation economy. Specifically, platforms offering tools with which people collaborate and coordinate their efforts to do good.

It’s clear the local newspaper I want will be born of this burgeoning economic sector because it will focus on my participation and my requirements. Empowering me is the whole point of the participation economy.

So my future local newspaper won’t just stream information about what’s happening, it will also accumulate knowledge. The knowledge I want about the local water supply will be presented as something like an up to date Wikipedia article, with links to related information such as water commission budgets and commissioner contact information.

It will include current and historical water quality information collected from local creeks, beaches, school drinking fountains and kitchen faucets, presented in tabular, map and other modern information visualization formats.

It will include an online forum where members of the community can discuss water policy or argue about the cost of different approaches or trade water quality test results.

It will maintain a directory of local civic groups including those active and interested in promoting a better water supply.

It will maintain a calendar listing upcoming meetings of the water district and water invested community groups, and it will let me sign up for reminders and alerts.

The local newspaper I want will utilize an information architecture in which I am not a member of an audience or a product, I am a member of the community and a participant.

The local newspaper I want won’t display any commercial advertising. It will be crowdfunded.

It will develop an internal online platform to manage and administrate reporting, knowledge accumulation, community building, ideation, workflow and policy development, and support itself by selling subscriptions to those tools to outside civic organizations such as Elks, Indivisible, the California Association of Realtors, the Santa Cruz County Business Council and other groups working in the community.

It will develop and monetize civic intelligence through paid newsletters and advanced analytics for premium subscribers.

It will make alliances with the local library, museum, schools, public radio and community television groups.

It will collaborate with community members hosting Internet-connected weather stations, web cams, and air, water and other environmental quality sensors.

It will foster a community of correspondents, wiki editors, contributors and participants.

The local newspaper I want won’t be a newspaper anymore. It will be a knowledge base and knowledge exchange.

But sadly, it doesn’t yet exist, and local journalism following the business model of the attention economy and the ownership of hedge funds is clearly doomed.

This is brought home by the fact that now 30 years later Cruzio owns the building in downtown Santa Cruz originally built by the Santa Cruz County Sentinel.

Thirty years ago, we never dreamed how ubiquitous the Internet would become. We had high hopes, some since fulfilled, some yet to be achieved.

The evolution of the business of local journalism is among the yet to be, but there is hope for the near future.

While ownership might be sanguine about the relentless rounds of firings and layoffs and reduction of coverage, journalists and j-schools are not, and are leading the discussion about next generation business models and methodologies.

Blogging is growing up and the blogging platform ecosystem is overlapping more into newspaper publishing and community building. The development roadmap of Automattic, maker of WordPress, looks especially promising for the next generation of local journalists.

And perhaps most important, Internet users are not only becoming more comfortable with crowdfunding and paid subscriptions to tools and reliable information, they are demanding to participate in the economy not as passive customers but as active stakeholders.

It’s inevitable that as the digital community building ecosystem and the participation economy grow, someone will finally put the pieces together.

And I’ll finally get the local newspaper I want.