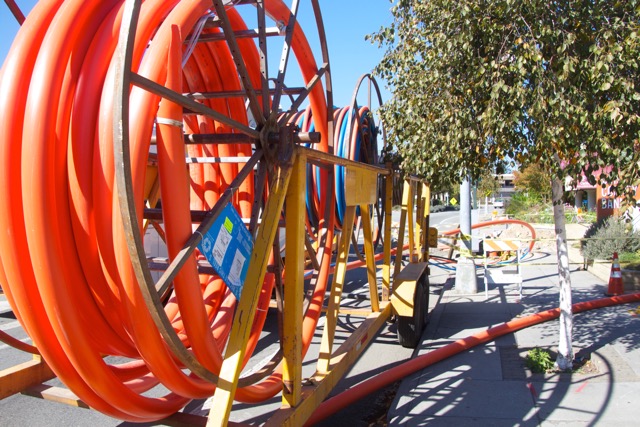 immediately. The gigabit speed, fiberoptic network is being built in collaboration with the City of Santa Cruz and has the goal of providing affordable, next-generation broadband to every home and business in the city.

“We could not be more excited to finally be breaking ground,” declared Cruzio’s President and co-founder Peggy Dolgenos. “True, cutting-edge, locally-operated internet is always a goal, and now that goal is closer than ever.”

Cruzio Internet and the City of Santa Cruz have been developing plans to build out a high-speed network for the past two years with various financing options. Spurring the project forward, and demonstrating the construction methods and business model involved, Cruzio is taking the bold step of initiating this first “neighborhood” — covering around 1,000 homes in the downtown area — independently.

“The best way to demonstrate how successful this network can be is to just start building it,” said Cruzio’s Chief Technology Officer and co-founder, Chris Neklason. “The City Council and staff have been fantastically encouraging and we decided the time was right to take that encouragement and put it into action.”

Starting this fall, Cruzio engineers will program and install the hardware necessary to “light up” the gigabit speeds. At the same time, construction crews will move through the neighborhood installing the backbone fiber path, and connections to the homes of anyone who has signed up.
“We’re thrilled about the low price we can offer City residents,” continued Dolgenos. “We are aiming for $50 per month for gigabit internet — one of the lowest prices in the whole country. This is not an elite service, we want to make it affordable to as many people as possible.”

“Cruzio has already proven they lead the way with a gigabit-class wireless network,” said J. Guevara, City of Santa Cruz Economic Development Manager. “Now we get to see the first step for Santa Cruz Fiber by providing fast and affordable internet in Downtown Santa Cruz at an unbeatable price.”

The City of Santa Cruz and Cruzio continue to explore how to expand the network throughout the city.

Cruzio, founded, run, and wholly owned by residents of Santa Cruz, is one of the largest independent internet service providers in California and a registered Competitive Local Exchange Carrier (CLEC) with a significant market share (about 9,000 households and businesses) in Santa Cruz County. Established in 1989, Cruzio connects businesses and residences around Santa Cruz County and parts of the Bay Area with multi-gigabit fiber internet, business-grade wireless internet, and other internet and web services. Our beautiful headquarters in downtown Santa Cruz serve as an Internet Exchange Point and data center, with colocation, flexible office space and coworking for startups and small businesses.  www.cruzio.com