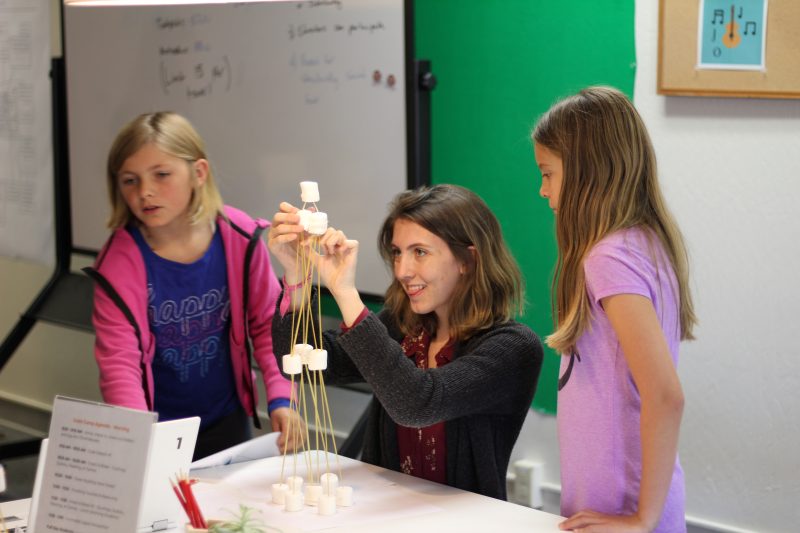 (Photo above: Instructor Morgan Eidam works with students to build the tallest and most structurally sound tower during an offline activity at camp. Contributed.)

Why do we think it’s important to support women in STEM?

The Santa Cruz Code Center was opened by the Code Naturally team in January 2018 to provide 4th-8th graders a comfortable and fun place to experience computer science and programming. Code Naturally has been working with local schools for the last 3 years to develop software and curriculum that enables any student to learn programming – regardless of their interests or experience. At the Code Center, students create projects in JavaScript and receive 1 on 1 support from educators and individually crafted lesson plans to help them build a strong foundation in Computer Science.

We partnered with Cabrillo College to provide students in Pajaro, Aptos, and Capitola a convenient avenue to learn programming over the summer. The partnership is led by Jill Gallo, the assistant director of the Cabrillo Extension Program. Jill believes that “We can offer the very best opportunities to our community members by collaborating with entrepreneurs and small businesses that share or mission, values and vision. By partnering with these local organizations, Cabrillo Extension delivers innovative, relevant learning opportunities to the community, while offering organizations the opportunity to amplify their impact and expand their reach. It’s a win for everyone!”

Jill was extremely supportive of Girls Code Camp and believes that providing these opportunities to girls at a young age helps to ensure that they perceive STEM activities not as something that boys or girls do, but instead as a hobby or interest that they can pursue and succeed in.

We’re excited to have the opportunity to partner with such an excellent organization and have been impressed with the support their staff provides during Summer camp.

Why do we think it’s important to support women in STEM?

My family and I moved to the US in 2000 from Punjab, India. My two sisters and I and grew up in a traditional patriarchal family. Growing up, I made a lot of mistakes both big and small but saw little to no consequences as I was the “only boy”. Working my way through high school and preparing for college, I didn’t fear mistakes and failure. For me, they were a normal part of life and usually resulted in an opportunity to learn and grow. In the years since, I’ve discussed this outlook on failure with my sisters and found that they didn’t share it because they weren’t given the same freedom to fail and make mistakes. As I’ve watched them grow, I wonder if having the same unending support from my parents, would’ve led them down a different path.

My sisters are both hard-working students and both started college as STEM majors: Chemical Engineering and Mathematics. The first quarter/semester in college is difficult for any student, yet I was still surprised to see how quickly they both chose other majors. However, as I later learned, they both felt they were very much alone, and didn’t have the support network they needed to keep them going. They both switched out of STEM into finance and political science. I strongly believe that if they had more support and more female role models in STEM, that they would’ve fought longer to pursue the fields they originally chose.

I hope to see more young women pursuing STEM and feeling like they have the necessary resources and support network to succeed. Through the help of our scholarship program, our female educators, and Cabrillo college, we hope we’ll be able to provide young women with the tools and community they need to succeed in STEM.

Originally I was a business major and one of the requirements was to take a computer science class. I decided to take it my first quarter in my freshman year along with some friends. As my class learned how to code simple games using Java, I became deeply interested in computer science. My professor, Charlie McDowell, helped me learn the basics and showed me how cool computer science is. After that quarter I switched my major to computer science and I don’t regret it.

Having a female educator is encouraging, especially because of the stereotype that women are not good at computer science. The female professors I’ve had have made time in class to talk about women in STEM and to encourage the small amount of women in the class. Whereas, the male professors were less likely to emphasis women in STEM.

Were there any female educators or engineers in your life that inspired you when you were young?

Yes, my second semester of freshman year I had a female cs professor. Her presence in computer science broke all of the doubts in my mind that I could not do cs, or that boys are just so much better and I should not even try. She inspired me to continue my education in cs: if she could do it, then I can too.

What do you think about STEM and engineering atmosphere for women?

While STEM is male dominant, I see a lot of work on their part to invite women into the field. At UCSC there are clubs for women in STEM I can join, scholarships I can apply to, and professors that strongly advocate for women in STEM. Because of the whole stigma that women are less likely to succeed in cs, I observe that it pushes my fellow (women) classmates and I to work harder, in hopes of breaking this stigma. However, it follows that some women in cs are so afraid to show they do not understand the cs concepts, that they don’t ask questions. This may lead to intense frustration and eventually some women dropping out of cs. That is why I am so grateful that my professors encouraged us to ask questions and work hard to create a open atmosphere for women, the less represented in cs.

During High School I had been a part of our schools Girls Who Code club. This club was where I was first introduced to coding and it turned out to be something that I really enjoyed doing. Being in that club surrounded by my friends defininity made learning computer science a lot less intimidating.

I have found that all of the female engineering and computer science educators that I have had in the past have addressed the problems that many women in stem face and had tried their best to make the women in their class feel more comfortable.

What do you think about the STEM and engineering atmosphere for women?

All of the computer science classes that I have taken in the past have had a majority of male students. In the AP computer science class that I took in high school, I was one of three other girls out of around 30 students. I continued to see this trend in the classes i’m taking in college. This type of environment definitely turns women away from studying computer science and that is why it is so great there are a lot of programs that encourage women to study engineering.

There wasn’t really ever an “inspiration” to pursue computer science; in fact, if you’d asked me five years ago, I would never have guessed that I’d end up in it. I had always thought of myself as an art person that wasn’t particularly good at math or science. However, when I took AP Computer Science my senior year of high school at the urging of my mom, I ended up liking coming up with solutions to coding problems. In college, I wasn’t sure what to major in so I decided to take the introductory CS classes. Three years later, I am double majoring in CS and Art and am very happy my mom forced me to take that AP CS class so long ago.

Only two computer science professors I’ve had have been female so it’s kind of difficult to tell exactly what the difference between male and female educators are. I do think that if I had more female professors, it would help with my own imposter syndrome that stems from being a woman in CS. Additionally, while some of my male professors have expressed skepticism about my ability to succeed in CS, I have never experienced the same attitude from my female professors.

What do you think about the STEM and engineering atmosphere for women?

I’m really excited that women are gaining access to STEM in higher numbers now. There are a lot of resources and support for us entering the field; for example, Girls Code is a great pathway for girls to get involved with coding at a young age.