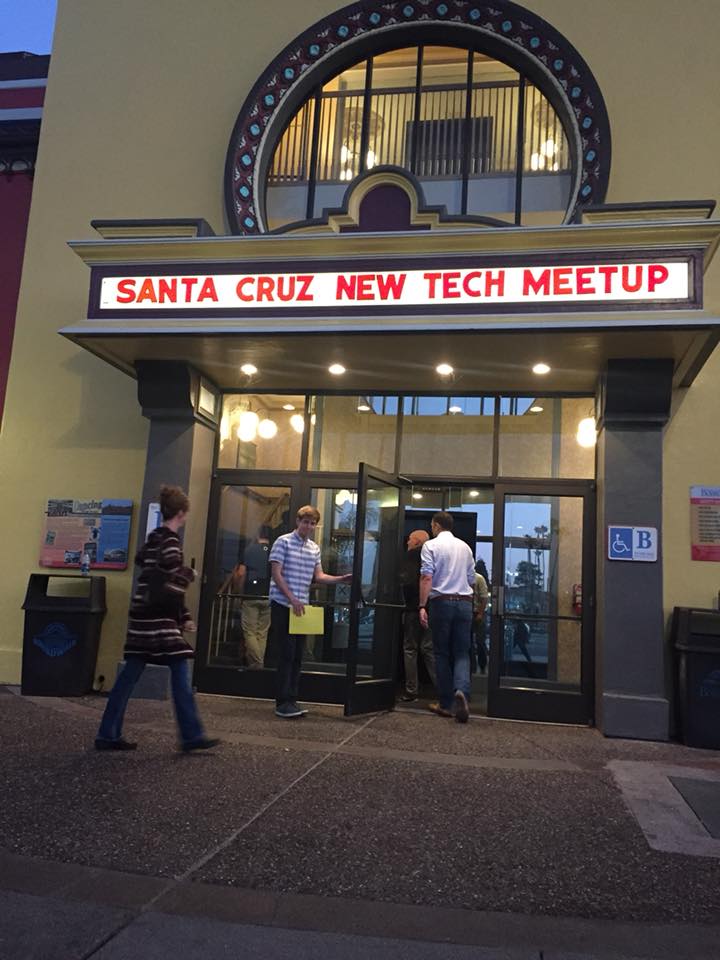 (Photo above: Attendees start to arrive at the Cocoanut Grove for the 10th anniversary of the Santa Cruz New Tech Meetup, held on February 7, 2018. Credit: Karen Kefauver)

Last week over 400 entrepreneurs, community members, and techies alike gathered at the Cocoanut Grove not only to learn about cutting edge Artificial Intelligence technology but to celebrate the 10 year anniversary of this pillar of the local tech community. 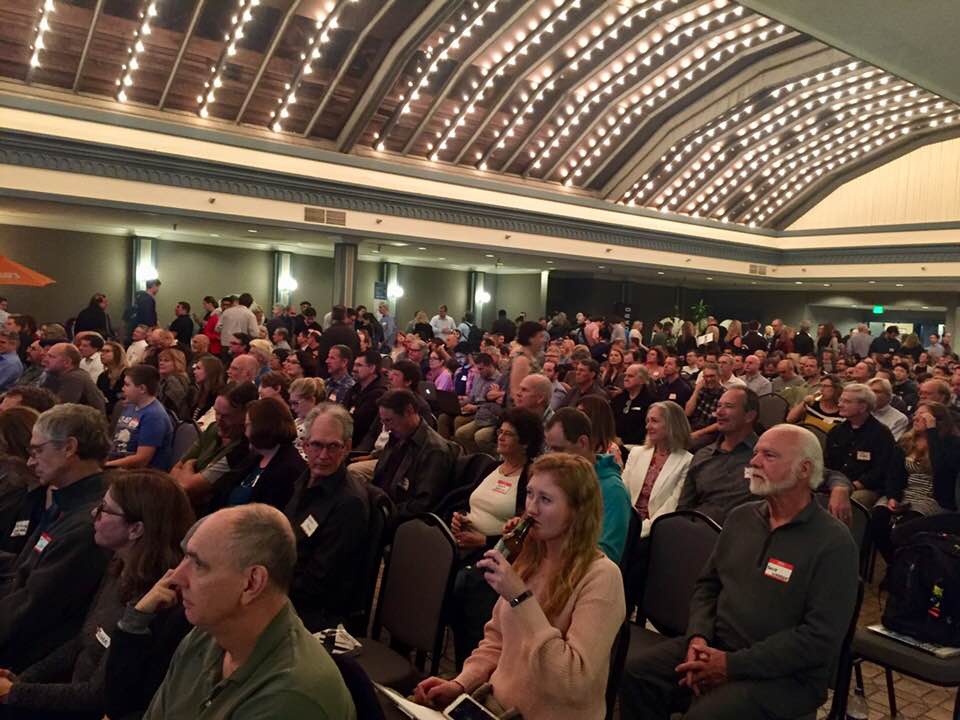 Before the event, I walked around and asked some of the attendees what they appreciate most about the Santa Cruz New Tech Meetup.

“I’ve met a lot of really cool people but more importantly, I met the two people who gave me my job,” said Sue Dayton of Buoy Labs.

“I started coming to this Meetup six years ago and it’s amazing what happened from that one event. It blossomed into a series of events that put me to where I am now in the tech community, I’m so thankful for what Doug has done,” said Matthew Swinnerton of Event Santa Cruz and Santa Cruz Works.

“Finding like minded, forward thinking people, really in search of community,” is what brings Robert Singleton, Executive Director of the Santa Cruz County Business Council, to the meetup.

Karen Kefauver, Social Media Coach and Writer, said, “I attend for two reasons: I get to network with friends and it’s an excellent speaker line up.” 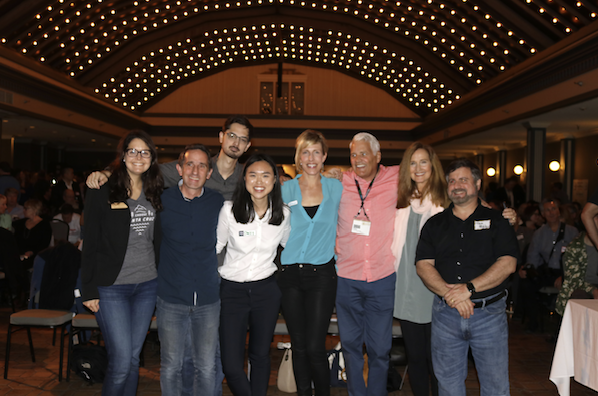 It takes a team! Doug Erickson (in red shirt) poses with the meetup team before the big event. (Credit: Jules Holdsworth)

After food and drink, Doug Erickson kicks off the event with a review of highlights from the past decade. He says there have been 106 events, 954 presentations, and 2120 pizzas served to date.

Then, Chris Thornberg, Founding Partner of Beacon Economics, spoke on the limiting factors for local tech growth and concluded that growth was primarily hindered by a lack of available affordable housing. Jonathan Lo, a Seattle-based social technology entrepreneur, introduced Better Finds, an app allowing you to sell items and have the proceeds benefit your favorite charity while giving you a tax receipt. Next up was Sam Lessin, CEO of Fin. Fin is an “artificial” AI assistant. It combines complex networks and machine learning programs augmented by human assistance and decision making capabilities. He took a historical view of the interest in AI since its founding in the 1950s, visualizing this as a multi-decadal hype wave. In the context of this larger cycle of interest in AI, the popularity of AI conversational agents is a minor hype wave.

Thomas “Elvis” Jones of Amazon made the case that cloud computing is integral to executing machine learning on a large scale. One example of the kind of machine learning services that Jones highlighted was presented by Simba Khadder and Ryan Brounley. The two UC Santa Cruz graduates told us about their platform, Triton, for a personalized user experience. Similar to the recommended sidebar on Youtube, Triton uses specialized algorithms and complex data types to quickly provide companies with a means for client specific personalization. Then, Ryan McVicker spoke about Vocasso’s cutting edge headset that provides people with speech impediments a tool to communicate freely and interact with their world. Using AI neural networks and muscle movements in your chin and neck, the headset allows the user to mouth words silently and have them played aloud.

The program ended with a fireside chat featuring Guy Kawasaki, chief evangelist at Canva, and Marilyn Walker, Professor of Computer Science at UC Santa Cruz. The duo examined the relationship between humans and AI bots such as Alexa, Google Home and Cortana. Alexa’s capabilities are well suited to access all of Amazon’s services just as Google’s Home is designed to access Google services. While there is minimal overlap, the two bots exist in separate universes or tech silos. Recent advances in voice transcription have improved their capability to transcribe human speech into words inside a computer. Once you have the words, it’s possible for machines to take these words and turn them into actions. Now the issue lies with the bot’s own ability to perform what is asked of them. The toolkits for translating words into action have not advanced as quickly as transcription and thus we see a lack of these bot’s ability to execute simple tasks. The key challenge moving forward is creating toolkits to increase a bot’s ability to perform complex tasks, especially those that involve combining the answers from multiple searches. Another challenge, one being addressed by students in Marilyn Walker’s lab, is creating bots that can carry on a prolonged conversation with humans. 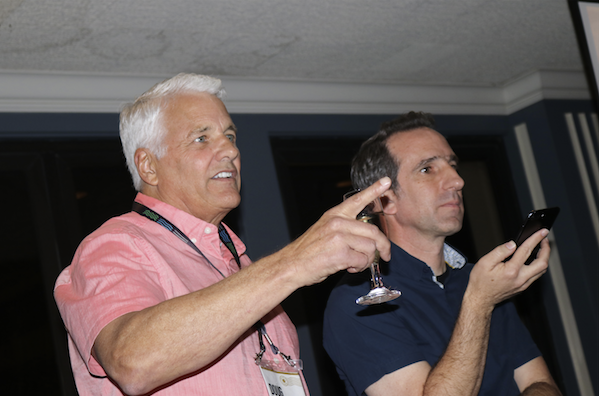 But the most touching part of the evening was when Matthew Swinnerton took the opportunity to thank Doug Erickson, the founder and mastermind behind the Santa Cruz New Tech Meetup, for successfully creating an identity for the emerging local tech community to unite behind. The crowd cheered and gave Doug a heartfelt standing ovation for his ten years of service.

I later asked Doug what inspired him to establish this meetup.

“I knew thousands of people in the tech Industry around the world but I knew very few people in my hometown Santa Cruz, so I decided that we needed a way for technology professionals to meet, to network, to get to know each other. I wanted to network everybody and to showcase areas of Santa Cruz where tech was fruitful.”

Since ten years is a long time, I wondered what motivates him to continue running the organization.

“I have a very strong sense of community, I love Santa Cruz. I like to give back to the community that I believe is just amazing and has given my family, my kids, a very rich life.”

After a decade of Doug’s service to the Santa Cruz Tech community, it was heartwarming to see this community giving back to him. 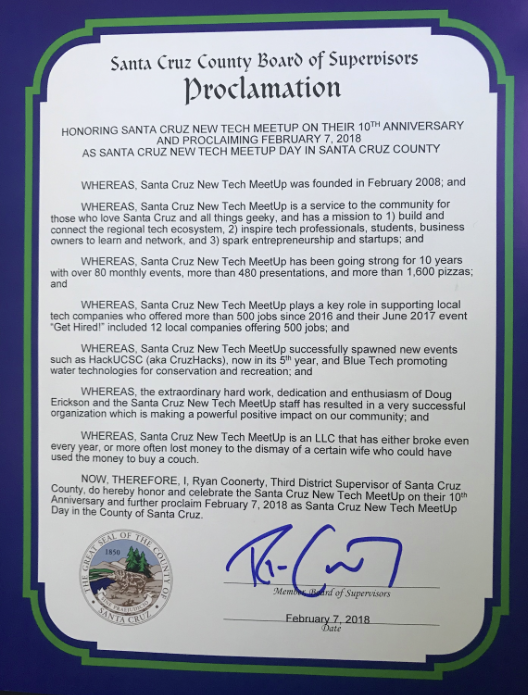 Jules Holdsworth is a photographer and social media consultant. She can be reached here.

Karen Kefauver is a writer, photographer, and social media consultant. She can be reached here.