Hack UCSC: A Step in the Right Direction 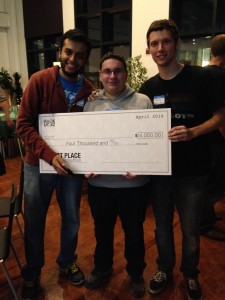 Speaking before a packed house of the who’s who of the Santa Cruz tech and business communities, members of city government, university students, and fellow investors at the UC Santa Cruz University Center, Bud Colligan, founder and CEO of South Swell Ventures, explains to the crowd at the UCSC Hack awards dinner how the event has served as a vital first step in uniting talent from the university with the local business community.

“It’s about new ideas. It’s about creative, smart people. It’s about really starting to break down the barriers between the university and the local tech ecosystem that we haven’t had before, and we need that,” says Colligan. “It’s really a point of departure for what the community can be, what our new jobs environment can be, and what a new collaboration between the university and the tech community can be.”

The UC Santa Cruz Hackathon or Hack UCSC, held at Oakes College on the UCSC campus during the weekend of April 5 and 6, pitted groups of university students, recent grads, and a few high school students, against each other in a 32-hour battle to create a functioning, or at least mostly functioning, software application under the simple theme of “Santa Cruz.”

“One of the larger reasons behind the Hackathon is really to kind of bridge the gap between the tech community and the UCSC community,” says cofounder of Civinomics, and Hack UCSC sponsor and mentor, Robert Singleton. “It just makes sense that the thematic requirements for the project is to focus on something that is Santa Cruz related.”

Organized by Santa Cruz New Tech Meetup’s founder, Doug Erickson, Brent Haddad of the UCSC Center for Entrepreneurship, and UCSC student Mark Richard Adams, who facilitated a majority of the two-day event, Hack UCSC gained sponsorship from an array of local companies such as Colligan’s South Swell Ventures, Civinomcs, and NextSpace, among others.

Sponsorship for the event also came in the form of mentorship from members of the tech industry like Singleton.

Hack UCSC began on the morning of Saturday, April 5, with a talk from Silicon Valley-based executive and entrepreneur, Lila Tretikov, and then transitioned into idea pitching and group formations. At noon the Hack began, and groups began to map out and execute their ideas.

Among the teams, whose memberships were as diverse as their ideas—such as an application that would allow users to share music with strangers, or find interdisciplinary talent for projects among UCSC students—Tech Beat chose to follow two group in particular. One team, comprised of UCSC computer science students had simply had it with missing the bus.

“I’ve been wanting to make this [application] for a while,” says UCSC computer science student, Carl Eadler, “While trying to get to class and waiting for a bus, you think ‘should I try and wait for the bus or leave and not wait for the bus.’ You can wait for the bus and be late for class, or start walking, and just when you’re out of range, the bus shows up. It’s annoying either way.”

With that in mind, the group of four designed an app, which they call, “Where’s the Bus?” The idea is that campus and city buses would be supplied with GPS trackers that would show their location in real time, thereby easing the last minute decision to walk instead of wait.

To provide competition with online coupon companies like Groupon, another group of UCSC students came up with the software application they dubbed “Bubblecoup,” which awards a higher discount to those who share their coupons with others via social media. It would also charge less to the company offering a coupon than Groupon, who takes upwards of 50 percent of the profits earned through their discounts. One of the brashly confident coders of the team explains its local benefits.

“This thing could actually make a difference. It’s something that could save people money, and help small businesses at the same time, which we know Santa Cruz would love.”

After the “code freeze” on Sunday, groups presented their ideas to one of six judges. Both teams have high hopes for their concepts going into their first presentations, but the team that created “Where’s the Bus?” doesn’t make it to the next round.

Team Bubblecoup has better luck with their pitch, and makes it to the final six. At the high energy awards dinner, they, along with the five other finalists pitch to the judges a final time, and in the end Bubblecoup wins the grand prize of $4,000. The runners up, “Project Slug,” and “Top Five” who also took home the people’s choice award of $1000, win second and third place, respectively.

Everyone wins in one way or another

In the end, connections have been made, talent has been scouted, and everyone involved in Hack UCSC learned something that they didn’t know going in to the event on Saturday morning.

“Even though not all six finalists are going to walk away with a prize, they still walk away with an incredible experience,” says Adams. “They did something crazy this weekend that I think they’re never going to forget for the rest of their lives.”

One thought on “Hack UCSC: A Step in the Right Direction”