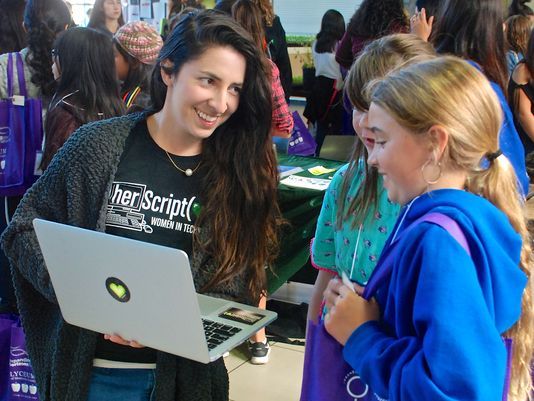 By Tom Leyde
The Californian

(Photo above: Antia Garcia, founding president of herScript, talks to students at a job fair at Hartnell College in Salinas about computer coding. Credit: Tom Leyde)

“We wanted to end up in Silicon Valley, with all the odds against us.”

For a while, it was one of the best-kept secrets at Hartnell College.

In the beginning, herScript, a group of 12 women computer science majors in the CSin3 program, was a clandestine organization.

The CSin3 program is a collaborative degree program between California State University – Monterey Bay and Hartnell College which allows students to earn a computer science bachelor’s degree in three years.

The group of women began meeting weekly in the winter of 2014. They gathered in a tiny room known as the “pizza room,” located on the second floor of the C wing at Hartnell’s East Alisal campus.

Their purpose was threefold: to talk about professional development and high-tech topics; to review homework and topics not taught in the classroom, and to do pair programming. That’s delving deeper into class topics and more advanced topics that kept them ahead of the computer science curriculum.

“We needed to support each other and work on things outside of class …,” she said. “We wanted to end up in Silicon Valley, with all the odds against us.”

Silicon Valley’s tech industry has long been known as a man’s world, and women have long been underrepresented.  Currently, only14 percent of U.S. engineers are women, according to the Congressional Joint Economic Committee.