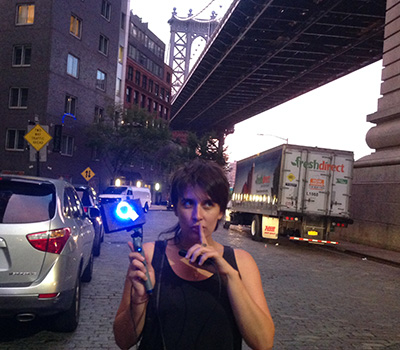 (Photo above: A SceneSampler player tried to capture a quiet scene in New York City during the Come Out & Play festival in July. Photo courtesy of Edward Melcer.)

SceneSampler, a game from UCSC’s Social Emotional Technology Lab, is an official game selection to be demonstrated at the international festival of independent games

Many videogames are designed to draw the player ever deeper into the world of the game. At Katherine Isbister’s Social Emotional Technology Lab at UC Santa Cruz, however, researchers are interested in games that draw players’ attention to the world around them and create different ways of engaging with other people.

“My lab is interested in how we can use technology to heighten in-person interactions and engage people with what’s around them rather than separating them,” said Isbister, a professor of computational media.

One game from Isbister’s lab, called SceneSampler, is among the official game selections to be demonstrated at the 2017 IndieCade Festival taking place October 6 to 8 in Los Angeles. Known as the “Sundance of the videogame industry,” Indiecade celebrates independent games and is open to the public and the game industry. The SceneSampler demo will be part of IndieCade’s signature Night Games event on Friday night.

Isbister will also be joining Michael John, director of UCSC’s Games & Playable Media master’s program, on an IndieCade panel to discuss future trends in independent games. Isbister will be talking about the growing use of wearable technology and custom hardware in new games.

“With the whole maker movement, the components and kits for building your own hardware have gotten cheaper and more accessible, so it’s a lot easier for independent developers to put together interesting projects with different kinds of controllers,” Isbister said. “We offered a class on alternative controllers last year, which got a lot of interest from students, and we built custom components for the game we’ll be showing at the festival.”

SceneSampler is a collaborative game in which players work in pairs to capture scenes from the festival in an unusual way. One player wears a custom-built old-timey ‘camera’ with a hidden embedded tablet device, while the other carries a sound sampler that detects ambient noise, which looks like an old-fashioned flash unit. Player teams are given challenges to find a specific kind of scene, such as a silent crowd, and record it by filling up the sampler with ambient noise and taking a snapshot with their camera. They bring their samples back to the game master, who marks their scene on a large map, building up a visualization of the social soundscape of the festival. Players’ images are also uploaded onto social media where people can see these sampled moments from the festival.

“The idea is to get people to move around the festival capturing mementos like a scavenger hunt, and you end up with a photo stream that is a different kind of record of what was happening,” Isbister said. “People can take on as many challenges as they like, and then get a photo taken of their team. It’s a pretty casual, free-form experience, meant to build connections between players as they experience IndieCade.”

SceneSampler was previously featured at Come Out & Play, a festival of street games held in New York City in July.