In Salinas Valley, the future of farming is already here 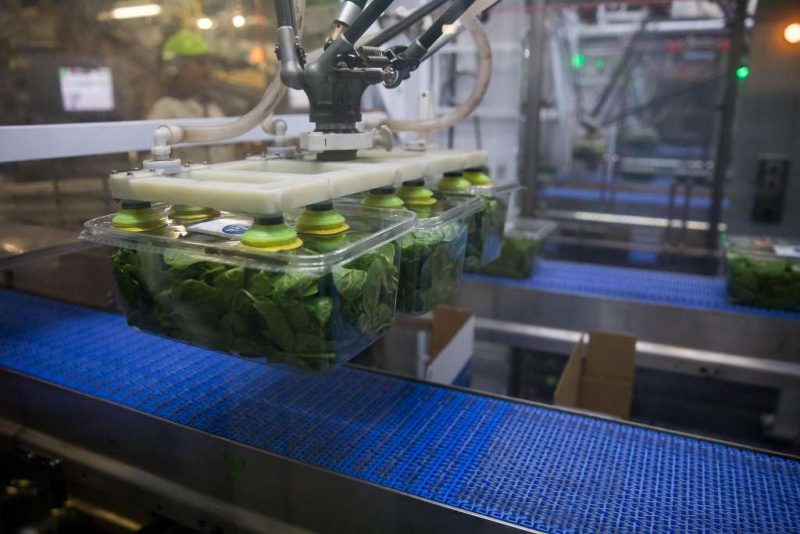 (Photo above: Taylor Farms in Monterey County, one of North America’s largest producers of fresh-cut fruits and vegetables, uses automation to help harvest and ship its products. A robot’s vacuum suction lifts salad cartons and places them into boxes for shipping. Credit: Mason Trinca)

In the field, self-propelling harvesters lop off the heads of cabbages, then funnel the 8-pound goliaths to workers who trim and sort them. Inside a nearby Taylor Farms packing plant, a three-armed robot pivots and turns to maneuver bagged salads squarely into packing boxes.

Taylor Farms is a prime example of changes to come in the valley. When harvesting 1.5 million to 1.6 million pounds of iceberg lettuce a day, as the Salinas producer of bagged salads and fresh-cut vegetables does, automation starts to make sense.

Although one of the biggest players in Salinas Valley, which produces so many greens and other vegetables that it has been dubbed America’s Salad Bowl, Taylor Farms is not alone in its move toward automation. Two major factors have driven technology in the region. One is food safety, a major priority ever since the deadly 2006 e. coli outbreak that was traced back to locally grown spinach. Robotic arms are less likely to transmit pathogens than humans are, decreasing food safety risk. The bigger and more recent push for ag tech, however, has come from rising wages coupled with a labor shortage.

Industry and labor insiders say automation and robotics will only increase in the next five to 10 years, with California’s minimum wage due to rise to $15 per hour by 2023, and the passage of AB1066, which calls for stricter overtime pay rules for agricultural workers. And while agricultural workers are in short supply now, the labor balance could always shift toward a surplus, in which case any jobs replaced by machines could be gone forever.

“In the end, I think technology is going to really change the shape of this valley,” says Cesar Lara, executive director of the Monterey Bay Central Labor Council.