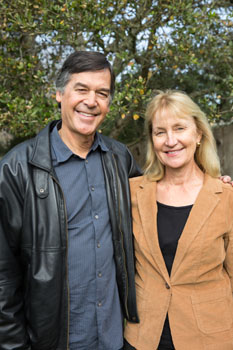 (Photo above: Bud and Rebecca Colligan, longtime supporters of the Genomics Institute, have established the Colligan Presidential Chair in Pediatric Genomics with matching funds from the University of California Office of the President. Credit: Carolyn Lagattuta)

Stepping up the fight against childhood diseases

The UC Santa Cruz Genomics Institute has been opening up new high-tech fronts in the battle against children’s diseases.

John “Bud” and Rebecca Colligan, longtime supporters of the Genomics Institute, have established the Colligan Presidential Chair in Pediatric Genomics with matching funds from the University of California Office of the President.

The endowed chair will support a distinguished member of the UC Santa Cruz faculty whose research involves pediatric genomics.

Efforts at the UC Santa Cruz Genomics Institute to drive targeted treatment of diseases by unlocking the world’s genomic information include a focus on pediatric cancer driven by the Treehouse Childhood Cancer Initiative.

David Haussler, scientific director of the Genomics Institute, said that the Colligans have been “terrific supporters” of the Genomic Institute. He noted that the endowed chair will help the Institute build on its expertise in pediatric cancer while extending its efforts to fight other childhood diseases.

The Treehouse Childhood Cancer Initiative was established to analyze genomic data of children with cancer in the context of large datasets of both pediatric and adult cancers. This allows researchers to identify situations where an available drug is predicted to work for a given patient’s tumor. Treehouse promotes the sharing of pediatric cancer genomic data as well as the translation of the findings from this analysis to the clinical setting. Cofounded by Olena Morozova, a research scientist at the Genomics Institute, the initiative has grown rapidly and recently received a major grant from St. Baldrick’s Foundation.

“Our pediatric cancer genomics program has been one of the fastest growing and most exciting programs in the Genomics Institute,” Haussler said. “The focus on children’s diseases is one that resonates with people here, and we’ve found that it’s an area where our emphasis on data sharing can really make a difference.”

Increasing support for endowed chairs is a goal of the Campaign for UC Santa Cruz, which has raised more than $286 million for the campus.

“Rebecca and I wanted to support the growth and world-class research of the Genomics Institute, and we felt particularly strongly about helping children who are suffering from rare diseases,” said Bud Colligan. “The Genomics Institute has been coming up with approaches to treating pediatric cancer that have never been tried before.”

“It’s especially exciting that this pediatric research is happening right in our own backyard at UC Santa Cruz, and we wanted to support that effort,” added Rebecca Colligan.

The Colligan family has had a decades-long impact along the Central Coast. Bud Colligan is the Co-Chair of the Monterey Bay Economic Partnership and the founder and CEO of South Swell Ventures. Rebecca Colligan is an artist who had a successful career in photography and now works in mixed media and oil painting.

The Campaign for UC Santa Cruz supports excellence across the university through increased private investment in the people and ideas shaping the future. It is bringing critical new resources to each academic division, and to signature initiatives in the Student Experience, Genomics and Health, Coastal Sustainability, the Institute of the Arts and Sciences, and Data Science Leadership.