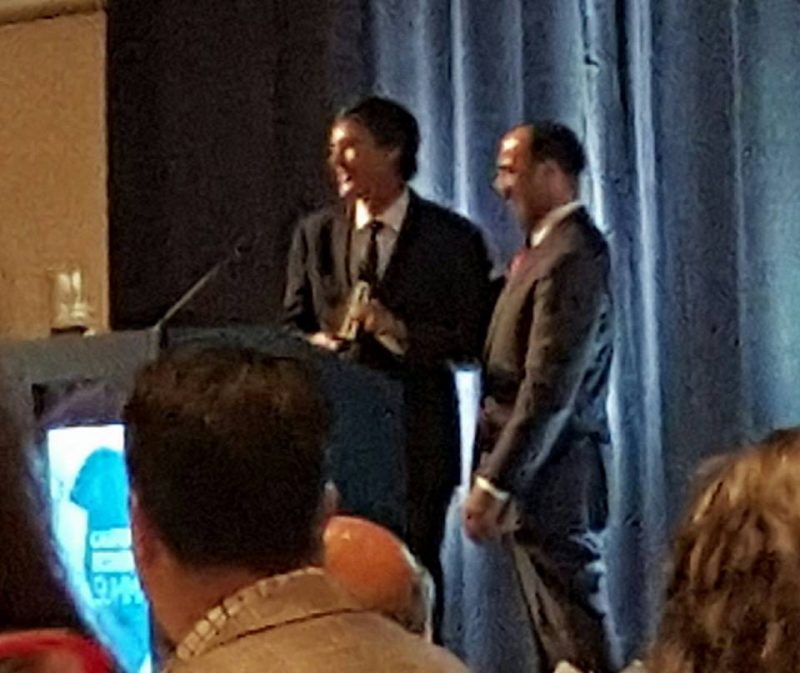 [Editor’s note: I first met Bud Colligan by behaving in a way that felt a bit nervy at a Santa Cruz Community Leadership Visit (CLV) tech session in 2013 (10/27/13). My efforts to reach out worked because Colligan has been a consistent supporter of Santa Cruz Tech Beat, and other organizations in the local tech scene, ever since. Thanks, Bud! Kudos on your award.]

The California Regional Steward Award honors “individuals who exemplify leadership that helps sustain the Golden State as a place to create and thrive, to enjoy and to explore, to nurture and to bestow to future generations.

Colligan, Co-Chair of the MBEP Board of Directors and CEO of Swell Ventures, was recognized today as the recipient of the 2016 California Steward Leader Award. The award signifies Colligan’s outstanding commitment, vision and leadership in promoting economic, social and environmental growth throughout the state of California. The award was presented at the California Economic Summit by Jimmy Panetta, Congressman-Elect, 20th Congressional District.

The California Regional Steward Award honors “individuals who exemplify leadership that helps sustain the Golden State as a place to create and thrive, to enjoy and to explore, to nurture and to bestow to future generations,” said Bill Mueller, CEO of Valley Vision and Co-Chair of the California Economic Summit Steering Committee.

The California Economic Summit is a project of California Forward and the California Stewardship Network.  Since its foundation in 2012, the Summit has engaged more than 3,000 business and civic leaders in sixteen regions around the state to harness the power of regional collaboration to catalyze economic innovation and growth.

“Whether he is helping grow our regional tech ecosystem, supporting the local arts community, or instigating new resources to create more affordable housing, Bud has proven himself over and over again as a stand out leader. He is a passionate community advocate who believes when we roll up our sleeves together, we benefit from the journey of the collaborative process, as well as the results achieved. We are very fortunate that he is here in the Monterey Bay Region, and contributes in so many ways to the betterment of our communities. There is no better example of a California Steward Leader,” said Kate Roberts, President of MBEP.

When Colligan was living and working in Silicon Valley, he made an impact there by founding Pacific Community Ventures, a venture-philanthropy organization which raises community-focused capital to enable local job creation. His leadership with the Opportunity Fund, a nonprofit microfinance provider, enabled not only its success in Silicon Valley, but now, its positive impact in the Monterey Bay Region.

Colligan has always been a champion for change through social entrepreneurship. He is the Founder and CEO of South Swell Ventures, an early-stage venture capital firm focused on technology investments in the Monterey Bay Region. He founded Central Coast Angels in 2013 and is a founding board member of Santa Cruz Works. He is an investor in and advisor to NextSpace, PredPol, PayStand, EdSurge, Water City, InBoard, Wheelhouse and Tixr. Colligan was on the original Macintosh team at Apple, ran Apple’s Higher Education Marking Group, was Chairman & CEO of Macromedia, and Partner at Accel Partners, a leading venture capital firm. Bud Colligan’s successful investments include lynda.com, Macromedia, CNET Networks, Days of Wonder, Yodlee and Brightmail.