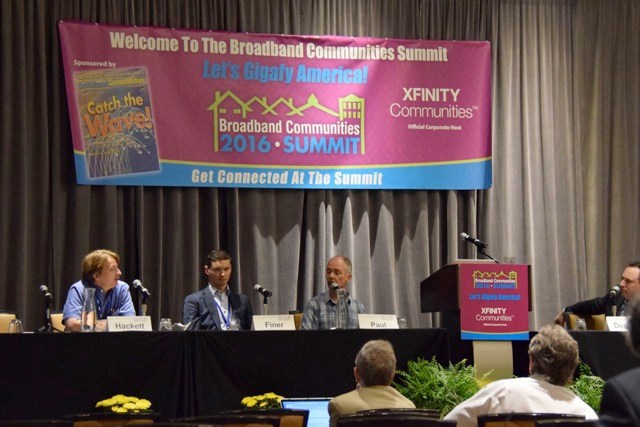 (Photo above: The author, James Hackett, participates on a panel at The Broadband Communities Summit in Austin, Texas. Contributed)

Since the City council voted unanimously to move forward with Gigabit-to-the-home fiber in January, we’ve been working non-stop on the Santa Cruz Fiber Project. In fact we’ve been so busy with it we’ve been totally neglectful in keeping everyone updated. We’ll be sure to post regular updates from here on out.

So what’s been happening since? Lots!

Firstly, and most importantly, we’ve been locked away in our Santa Cruz Fiber Project underground bunker with our partners at the City, engaging in high-level cogitation, extreme fine-tuning and the general hashing out of every little detail of the project and the agreement. This is a BIG project and we want to make sure we’re doing everything right. They say you should measure twice and cut once. Well, with this project we’re measuring a dozen times before that first cut. It’s that important. We’re making great progress and still absolutely expect to be breaking ground as we roll into 2017.

We’re also meeting with as many fiber electronics manufacturers, construction companies, engineers and designers as we can. At Cruzio we’ve been building and running broadband networks since before there were broadband networks, but there’s always room to learn more about the next wave of tech. The companies we’re talking to are on the cutting edge of fiber-to-the-premise deployments nationwide. We’ve talked to the designers, owners and suppliers for many of the biggest, most successful (and not so much) networks in the country. We’re determined to make sure that Santa Cruz’s network is the absolute best.

A week in Austin

Speaking of information gathering, a couple of weeks ago Cruzio’s project team, and the City of Santa Cruz’s team, all headed out for a week in Austin, Texas for the Broadband Communities Summit 2016. Everyone who is anyone in community broadband was there. We all learned a ton, met some great people and got lots and lots of encouragement from folks building the same kinds of community-owned broadband networks all over the country. It was pretty inspiring to hear from all those community leaders and it felt great to get some props for the way we’re approaching the Santa Cruz Fiber Project.

We also got major kudos out in Austin because it happened to coincide with the announcement of more Gigabit goodness in Santa Cruz. Cruzio and the City have teamed up with Siklu wireless to jump start the Gigabit project by serving 17 community, residential and business sites with Siklu’s gigabit, millimeter-wave wireless hardware. This is the first project of its kind in the country and we couldn’t be happier to get this quick an easy win for the city. You can read all about the project here and here.

That’s it for now. Thanks to everyone for all the support so far. In the summer, we plan to open up for pre-signups and we’ll want as many folks as possible to commit to the service and help us plan out the schedule of the build. The first people on board will be guaranteed service faster than anyone else. And, most importantly, the more people who sign up quickly, the lower the cost will be for every single subscriber.