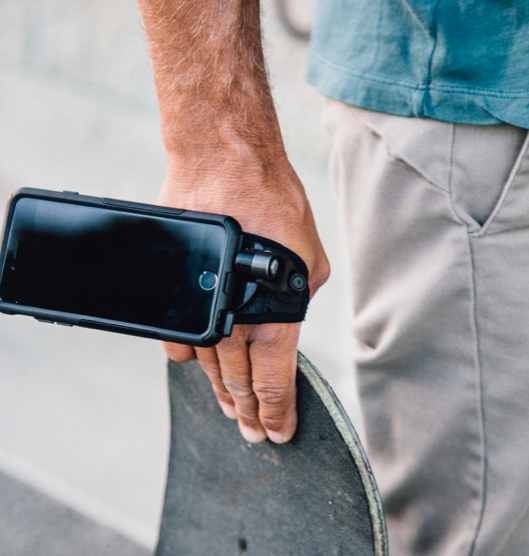 (Photo above: HANSNAP, now in the middle of a Kickstarter Campaign that runs until December 3, fastens to the back of the hand to be ready when you are. Credit: Christopher and Company) 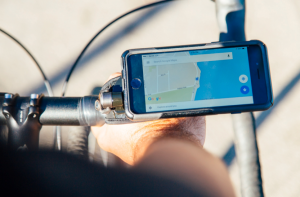 HANSNAP allows for a full grip. (Credit: Christopher and Company)

It may seem counter intuitive, but these are the words that I have always wanted to hear as a struggling inventor. To quote Evan Williams, previously CEO of Twitter, “Everything is obvious once it’s successful. Big wins come when you can spot something before it’s obvious to everyone else.” So far, this has been my experience with HANSNAP. Almost everyone who has seen this simple smartphone device has asked why it doesn’t already exist. I have had the pleasure of meeting with executives of top-tier phone case manufacturers, an Apple product manager, Samsung business development, and a top industrial designer at Pebble Smart watch (Pebble recently raised $20.3M on Kickstarter to supplant their 2014 record $10M raise) and all have had this similar reaction. It’s exciting to hear from these industry leaders that your idea should be successful, but how exactly does something become successful?

First lesson: How to Fail

HANSNAP started at a local incubator, Slingshot SV, with the help of local successful entrepreneurs Andy Van Valer, Ian Utile, and Raymond St Martin, where the foundation of a corporation was built. After initial prototyping, we went into patenting, fundraising and Incorporating. With a great idea, a functional prototype, and a vision, HANSNAP rushed into a Kickstarter campaign at the end of 2014 to try and raise $90K. This proved to be a lesson that most startups are required to learn: how to fail. At the end of a grueling 45 day campaign, HANSNAP raised only $7.5K of the $90K asking amount. Because Kickstarter is an ‘all-or-nothing’ platform, we walked away with zero cash.

Back to the Drawing Board 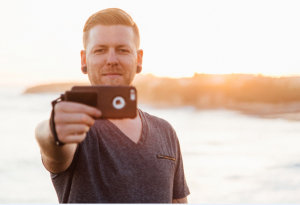 I knew something was wrong within the first week of the initial campaign, so I began to investigate the metrics behind its failure to thrive. Some had advised that I apply more muscle into the campaign and double down on my efforts, and so I did — initially. I talked with other folks who had run campaigns previously, I talked to PR ‘specialists’ and other entrepreneurs. What I discovered was that, apparently, it takes much more than a good idea for something to be successful.

I found my metrics of failure, and they boiled down to three simple concepts:

I took these three principals to heart and began working on them intensely while the campaign was still running. I was no longer trying to save the campaign because I was certain it was doomed, however I let the campaign run so that I could continue to learn from backers, media coverage, and the overall process in general. I focused my energy on making HANSNAP a viable product.

One of our biggest impediments to the design was phone compatibility issues. We didn’t want to start designing phone cases because the market is flooded with case companies, and many of them are actually pretty darn good. It was time to simplify. We shifted our focus and came up with the concept of an adhesive adapter plate that would attach to all the major phones, cases, tablets, and even GoPros.

But What Is It?

We’re still not quite sure what gadget category we fall in, so we describe it as a ‘hand-mounted Smartphone filming system.’ The system is comprised of a custom strap that grips your hand while an adjustable arm is fastened to a phone, tablet, GoPro, etc. This allows for a range of filming positions designed to bring stability and security during activities, on the job, or travel. The front-facing position is reminiscent of how one would hold an old-school camcorder. Fold the phone onto the back of the hand where industrial strength Velcro holds it in place for hands-free filming or to use while exercising, cycling, or anything else one might need to do with free hands and a readily available phone. Because the universal adaptor plate is connected with a quick disconnecting mechanism, the hand strap mechanism easily connects to provide stability across multiple devices (phones, tablets, GoPro, etc.).

As of this writing, HANSNAP has already raised 75% of its funding goal in the first week of starting our new Kickstarter campaign! Additionally, we have partnered with DEATHLENS, a skate-centered phone case and lens manufacturing company to offer a complete mobile filming kit that comes with the HANSNAP unit, a case, a wide angle lens, and the widest fisheye lens offered for smartphones. The HANSNAP unit by itself is going to retail for around $30, but you can get an early bird special on our Kickstarter for $20.

Check us out on Kickstarter: http://kck.st/1kaVkWX