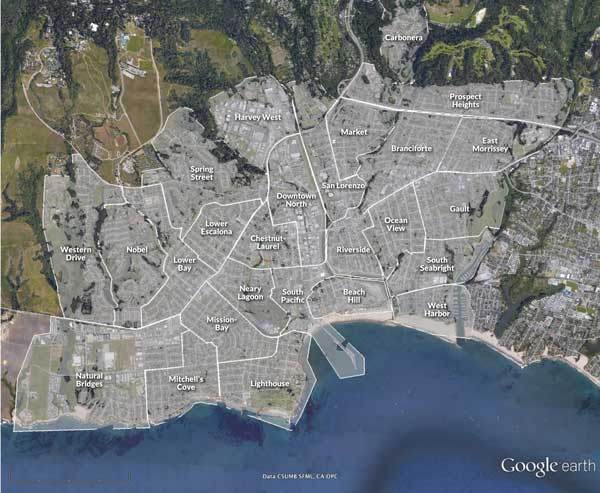 (Image above: Cruzio has divided the town up into 26 separate neighborhoods. Each would have its own hub leading back to Cruzio’s Internet backbone. Source: Cruzio)

On June 23, 2015, the Santa Cruz City Council unanimously approved entering into a public-private partnership with Cruzio to explore a fiber-to-the-home network within the city limits. [For more on that, see What’s So Big About a Gig? A Bold Vision for a 21st Century Santa Cruz, published June 25, 2015.]

Over the last several months, Cruzio and City of Santa Cruz staff have been working hard to develop a full proposal. On December 8, the City Council will vote on whether to give final approval to the project.

If approved, Santa Cruz City residents and businesses would have access to gigabit Internet speeds making Santa Cruz one of only a handful of Gigabit Cities across the US.

“This is a game changer for Santa Cruz,“ says Cruzio CEO Peggy Dolgenos, “and judging by the response to our survey, folks are really excited about the project.”

Cruzio has been gathering survey data from City of Santa Cruz residents for the last several months at santacruzfiber.com. Here are some of the results.