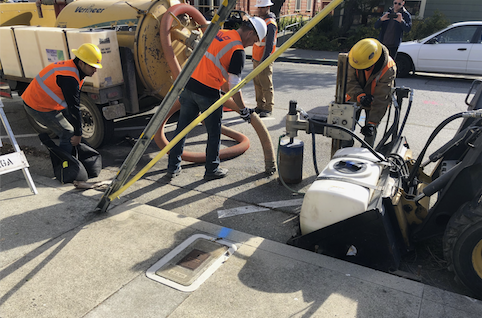 After working with the City of Santa Cruz and other utilities, Cruzio has begun its low-impact construction phase to bring Gigabit fiber internet to Downtown Santa Cruz.

The construction technique being used by Cruzio/Santa Cruz Fiber, called directional boring, allows the build team to install cables underground without costly and invasive open trenching. Instead, by making small potholes at opposite ends of a segment, and through use of special, electronically-guided equipment, crews are able to bore safely and quickly underground in between the points. As is the case with all underground construction, this process required that other utilities locate their underground assets for safety reasons. Hence the paint marks on the streets downtown that will soon be gone.

While the preparation for construction has been a lengthy process, Cruzio believes the final product, Gigabit speed internet, will be well worth the wait. “Any time you build new infrastructure it takes a lot of planning and preparation” says Christ Frost, Cruzio’s Director of Technology and Infrastructure. “Our goal first and foremost was to make sure we did it right the first time, and that we didn’t inconvenience our downtown neighbors.”

“In keeping with their history of supporting the local business community, Cruzio/Santa Cruz Fiber, has been quite thorough in reaching out and educating the community about the benefits of Fiber, and more importantly has been very responsive to the needs and concerns pertaining to installation,” says Chip, Executive Director of the Downtown Association. “We’re very much looking forward to the value that this project will bring to the business district.”

This new fiber optic infrastructure is a huge step forward for Santa Cruz broadband and will immediately increase the value of any building that is connected. Cruzio encourages and local residents or business with questions or concerns about the project to contact them directly at cruzio.com/contact.

The Santa Cruz Fiber network will start in downtown Santa Cruz, but Cruzio already has plans to take it to other parts of the County such as downtown Watsonville. The new network also allows Cruzio the ability to upgrade many of its existing services, which will now be classified as “fiber–backed”. These services, which include point–to–point wireless distribution, make Gigabit speeds outside of the initial build area possible, increasing coverage throughout Cruzio’s existing customer base. Fiber-backed Gigabit services are already available at a number of locations, and interested people can check availability at SantaCruzFiber.com. Those interested in getting fiber service at their downtown home or business should visit Cruzio’s website at www.santacruzfiber.com/downtown. We encourage anyone in Santa Cruz County interested in high-speed internet service to reach us at cruzio.com/contact.