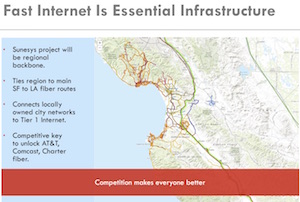 “The most important infrastructure for the future is fast, reliable internet connectivity,” said Bud Colligan, co-chair of the Monterey Bay Economic Partnership (MBEP) as he opened a day long conference on the state of the region’s economy. He said that incumbent telephone and cable companies have a big role to play in that, but “it is in our public interest to have a level playing field with robust competition.”

Broadband is intertwined with other infrastructure problems. Rebuilding or expanding roads, for example, offers an opportunity to put conduit in the ground. Colligan said MBEP would be working to make sure that dig once policies developed by the Central Coast Broadband Consortium – under consideration now by several local agencies – are approved and implemented by every city and county in the region.

Some – both the City and the County of Santa Cruz, for example – have adopted those policies, but actually getting broadband conduit into open trenches is still a challenge. “There’s a tremendous problem because the budgets for the roads don’t include any money for conduit, even though it’s so inexpensive,” said Peggy Dolgenos, CEO of Cruzio, a local Internet service provider, pointing out that it’s as much about transportation as it is about telecoms. “One of our goals is to get 3,000 people off the roads…one of the ways we’re trying to do it is better broadband,” she said.

“I urge all the elected officials in the room, it’s something that you all have to ask for in every meeting,” Colligan concluded. “If we’re not making this minimal investment right now…then we’re really being penny wise and pound foolish.”

[Editor’s note: Presentations from this event are available for download.]