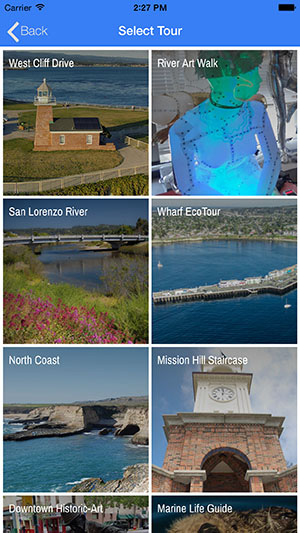 Telling a Compelling Story for Non-profits

Like businesses, non-profit organizations need to market their message. The problem is non-profits sometimes lack the time, skills, and funds to create a mobile app, which typically requires a large amount of web-based outreach and promotion.

“Mobile Ranger Guides” currently contains 10 self-guided tours. The tours aim to tell you a compelling story of each place — one that’s catchy, has photos that pop, and will keep you engaged. Mobile Ranger also re-purposes the stories into web and social media posts. They have developed a large on-line audience of people who love natural and human history content.

We Want an App 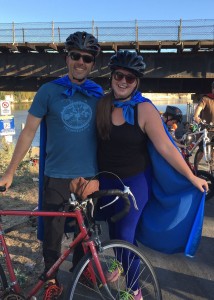 The Coastal Watershed Council (CWC) was started in 1995. For 18 years they specialized in water quality monitoring of Monterey Bay area streams. In 2013, they shifted gears to focus on the San Lorenzo River and make it a healthier watershed that is used and loved by the surrounding community.

“When we started our work to reconnect the community to the San Lorenzo River, we began leading tours and educating people with information and stories,” said Laurie Egan, stewardship coordinator for CWC. “But we were searching for a way to reach new people and more people. We thought an app would be the perfect way, but didn’t see how with limited resources we could make that happen.”

Egan heard about Mobile Ranger and approached co-founder Julia Gaudinski in early 2014 about working together.

“I am trained as an earth scientist and love to talk about watersheds and floodplains all day. I was thrilled at the prospect of creating a tour about stewardship of the San Lorenzo,” said Gaudinski.

A Collaboration is Born

Using information and photos from the CWC, they created an eight stop walking tour along the San Lorenzo River. Most of the content has also been posted on Mobile Ranger’s blog and dished to the social media outlets of CWC, Mobile Ranger, and affiliated web partners.

The mobile app is downloaded and used by an average of 100 people a month who spend an average of 7 minutes each reading the content. People have spent over 11.5 hours reading the CWC’s content. More than half, 55%, come back and use the app multiple times. 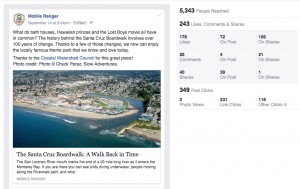 As of late September, an average of 275 people spent about 3 minutes reading each web post about the San Lorenzo. On Facebook, each post averaged 2,000 views and 100 interactions (likes, comments shares) and they have posting agreements with Santa Cruz Waves that generate 4-5 times those interactions with the same content. In comparison, the typical monthly guided tour led by CWC has 20 people and their Facebook posts get an average 270 views and 27 interactions. The different content outlets also tend to serve different demographics with younger viewers using the app and older viewers using the web and social media.

Greg Pepping, executive director of the CWC, likes the results, “The mobile app and the blog posts significantly boost our exposure and ability to educate people about the river and it’s value to our community. Mobile Ranger is helping us reach new audiences and start new conversations.”

One Stop Shop for Local History

Mobile Ranger aspires to be the place where both locals and visitors go to for information about the natural and human history of places. This creates a virtuous cycle for all organizations with their content in Mobile Ranger’s app, blog, and social media.

For example, when someone arrives in Santa Cruz and “googles” Lighthouse Point, they likely end up at MobileRanger.com and find storytelling about Santa Cruz. Suddenly, they can learn more about the little cemetery they passed to get to the hotel, or the river they keep crossing to get to the beach. They download the app, take the self-guided walking tour of the San Lorenzo River, and read content from several non-profits they never heard of before. The visitor has woven a rich history of Santa Cruz in their mind.

Currently, Mobile Ranger’s focus is Santa Cruz. But they’ve created a platform where the passion of locals can be brought together in one easy-to-read location.

“I created mobile Ranger because I like knowing the stories behind where I am, everywhere I am,” said Gaudinski. “So I have every intention of growing it beyond Santa Cruz.”

Mobile Ranger spent the summer improving the look and usability of their mobile app and is now ready for the official launch of “Mobile Ranger Guides.” The launch party will be held Tuesday, October 27 at “The MAH” (Santa Cruz Museum of Art and History) from 6:30 to 8:30 pm. Five new tours will be made available within the app that night.

Many of the local historians who created tours will be at the launch. Renowned historian Frank Perry will try to see if members of the audience know which ridiculous story from the past really happened. There will also be history trivia games with prizes.