Posted on May 4, 2014 by Sara Isenberg in Companies, Events, Santa Cruz Tech Ecosystem
Share This: 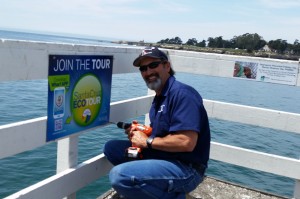 It’s the dawn of the 1910s, and the many tentacled arms of national rail lines have wreaked havoc on ocean shipping from Santa Cruz. City fathers, as a last ditch effort to preserve Santa Cruz as a viable shipping hub, authorized the construction of a really long wharf on the slim hope that accommodating deep water shipping would somehow turn back the tide of rail. It didn’t. Opened in 1914, the wharf never met the dreams of reviving Santa Cruz as a seaport – rail was too strong. Instead, fisherman, many Italian-born, turned the wharf into the base for their fishing businesses. In its heyday, it was a hard-working, vibrant place with 75-100 boats unloading salmon, sea bass, rock cod, and sole every day. In 1964, longtime City dreams to build a harbor were finally realized. This had significant impact on the wharf as the fishing businesses moved their base of operations to the new harbor at Woods Lagoon. Old-timers say they took the wharf’s lifeblood with them and left only a parking lot for their family-owned restaurants.

Fast forward to the 21st century. Economic and business development has been tempered with an environmental imperative. Ecotourism is an important economic engine for Santa Cruz. Today, City mothers and fathers envision a new future for the wharf as a landmark destination that showcases the Monterey Bay’s natural riches. The (draft) Wharf Master Plan seeks to change the way people think about the longest timber pile wharf on the west coast of the United States. It is as a gateway into the Monterey Bay National Marine Sanctuary, a special nexus of land and water resources, a platform for world-class marine research and education, and a beautiful place to stroll, eat and shop. 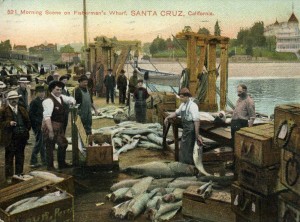 Ecotourism seeks to entice visitors based on the natural resources and beauty of a place. Mobile Ranger, a Santa Cruz based company, provides app-tours filled with a wealth of information about the areas natural and human history. An app-tour is used on your smart phone or tablet, so it’s portable, making it easy to be anywhere outside and learn more about what you are seeing, on the spot. The free “Mobile Ranger Santa Cruz Wharf” app-tour, for Apple and Android devices, tells the stories of the wharf’s past and highlights information about the surrounding marine ecosystems and its wildlife. The goal is for visitors to have a richer experience on the wharf by helping them discover, appreciate and connect to the natural surroundings.

Mobile Ranger views the wharf app-tour as a new model for how to create ecotourism related apps. We realize that every community has people with deep background knowledge and passion for a place and its unique stories. Mobile Ranger works collaboratively with municipalities, museums, non-profits, and private individuals to bring this knowledge and inspiration to the public. 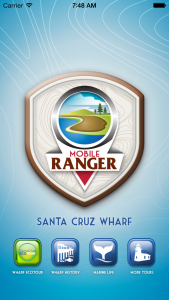 In this case, the free wharf app-tour incorporates the pre-existing Santa Cruz EcoTour,which features the environmental resources along the Santa Cruz coastline. It has ten stops from the Santa Cruz Harbor to the Seymour Center, with 5 of the stops focusing on the Santa Cruz Wharf. The Seymour Marine Discovery Center provides guided tours of the 5 Wharf EcoTour stops on Saturdays and Sundays at 1 and 3 pm. Otherwise, the EcoTour is self-guided. It began as an idea by UCSC student Ian Hunter and was implemented with support by the UCSC based IDEASS program, the City and several local non-profits. The original vision for the EcoTour was to have it be a mobile app for smartphones, but lacking the resources a sign-based QR code approach was used initially.

Try the free “Mobile Ranger Santa Cruz Wharf” app. You’ll see signs for the free wharf app-tour on the wharf and at all the EcoTour stops and can download it on location. Even if you are born and bred in Santa Cruz you’ll likely learn some cool information you didn’t know and appreciate your local area even more! You can also test out the app-tour amidst the May 17th Sanctuary Celebration on the wharf. There will be free live music, arts and crafts, educational activities, guided EcoTours and talks from local dignitaries; all aimed at highlighting the resources of Monterey Bay and the wharf. It is a family friendly event.

Mobile Ranger would like to thank all the talented and dedicated people from the organizations involved with the EcoTour and creation of Mobile Ranger’s free wharf app-tour: the City of Santa Cruz, the University of California Santa Cruz, including the Kudela Lab of Biological Oceanography, the Seymour Marine Discovery Center, the National Marine Sanctuaries: Monterey Bay, the Santa Cruz Museum of Natural History, the Santa Cruz Harbor, Save Our Shores, the Santa Cruz Surfing Museum and the Green Wharf Project.