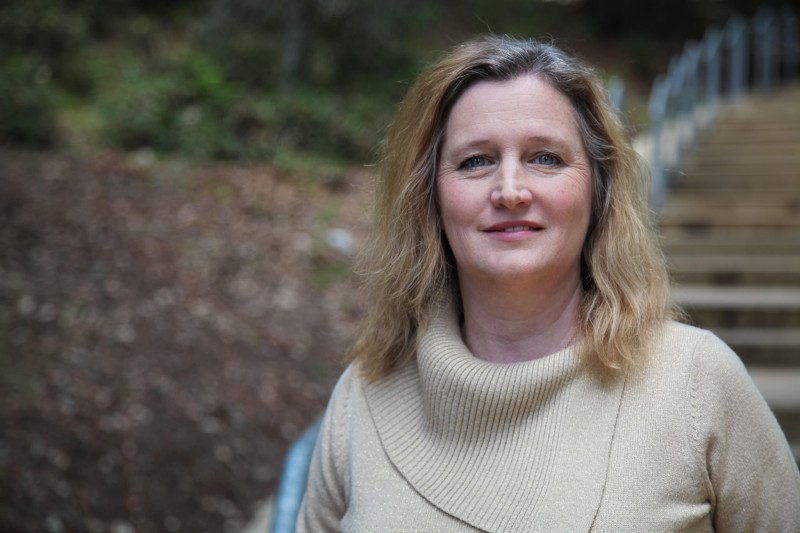 [Photo above: Sue Carter is the director of UC Santa Cruz’s Center for Innovation and Entrepreneurial Development (CIED) and associate professor of physics. Credit: Carolyn Lagattute]

Carter returned to campus this year to lead its new business center, CIED, the latest reincarnation of UCSC’s Center for Entrepreneurship (C4E), helping develop research innovations into marketable products. The C4E was known for launching a well-attended annual business design showcase and hackathon.

CIED plans to not only continue C4E’s programs, but also add an entrepreneurship academy for undergraduate and graduate students, to help them turn inventions into business models. Unlike C4E, which was housed in the Baskin School of Engineering, the new center will be part of UCSC’s graduate division, allowing more students and broader support, said Carter.

“Most schools have business schools or law schools and we have neither,” said Carter. “Since we have nothing, it means I have to reinvent everything basically from scratch.”

Carter, who has founded four companies in the last decade, said she’s excited about the opportunity.

“What does a business curriculum look like in the 21st century for today’s entrepreneurs? That’s basically what we’re trying to create.”

She said she wants to teach students to talk to customers to figure out what they really want and need.

“They basically need to get out of their lab, out of the academic world and into the real world,” Carter said.

She’s tired of people saying they can’t talk about their idea because they fear it will be stolen.

“It’s the implementation and not the idea. The first idea usually never survives the light of day,” Carter said.

Everyone wants to be the CEO of their own startup, but that requires experience. For a startup to succeed, the founder often has to assume a different role, Carter said. She urges students not to worry about their job title, and instead focus on implementation and perseverance.

Carter said the rise in income likely isn’t tied to the center’s success. “Licensing income to me is not a metric, primarily because it takes many years to go from an idea to licensing income,” she said.

A better measure of success is CIED’s record membership, she said. The center has 200 students on its mailing list and the annual hackathon is at maximum capacity. Each year, more students attend local tech events such as the Santa Cruz New Tech Meetup and intern at local companies through the center’s partnership with the City of Santa Cruz Economic Development office.

Carter said she aims to continue that trend.

“The number one goal is to build that community this year,” Carter said.

Want to get involved with UCSC’s Center for Innovation & Entrepreneurial Development?

If you’re interested in any of these opportunities, email Sue Carter at sacarter@ucsc.edu.

###
Kara Guzman is a freelance science and technology writer. Email her at kguzman@gmail.com.