Little Did We Suspect How Much Awaited Us… 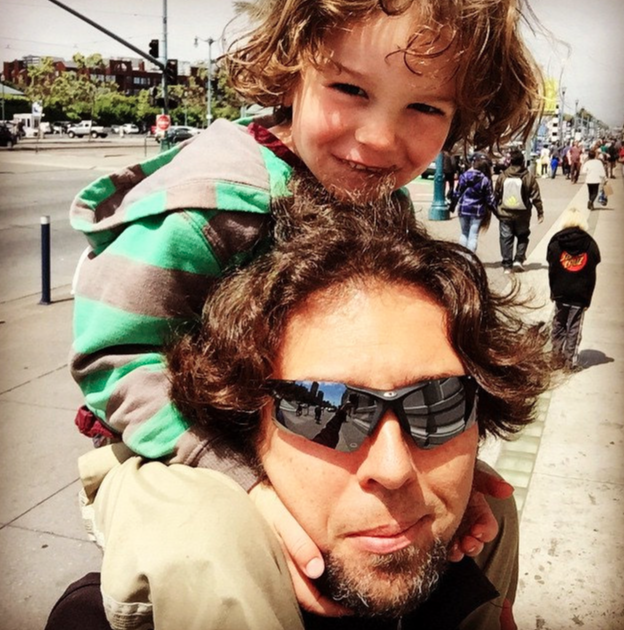 (Photo above: Selfie by the author with one of his two young boys. Credit: Maciek Smuga-Otto.)

The story of how one family, itching for a change, landed in Santa Cruz and is never going back — except to sell their house.

After two decades of living a quiet academic life in Madison, Wisconsin, my wife and I were itching for a change. Moving to Santa Cruz more than scratched that itch for us – little did we suspect just how much change awaited us.

Kim, my wife, was an associate researcher at a University of Wisconsin stem cell lab, and I was working as an interactive designer for a Madison-based biotech company. I had been a software developer previously, but re-trained in design and illustration to feed my artistic side. Kim had also dabbled in writing fiction, and the ultimate impetus for what followed came from her desire to incorporate writing more closely into her work.

She started looking into a career in science communication by applying to the journalism school at UW Madison, but after talking with several professional science writers she realized there were far more interesting and ambitious options out there. Among these, the Science Communications program at the University of California Santa Cruz stood out: A one year, internship-driven intensive science writing boot camp. As a backup, she also applied to similar programs at Boston University and at Chapel Hill, North Carolina.

In February 2014, Kim had sent out all her grad school applications, and we were eagerly awaiting responses: We knew we’d be leaving Madison, but didn’t yet know where to. Since I couldn’t realistically keep my office job as we relocated, I started looking around for consulting opportunities, and to my amazement, soon found a fascinating one:

Digital World Biology, a Seattle-based science education company, was looking for a lead programmer to push its recently released molecular visualization iPad app to a new level. Since Madison’s tech community is well-connected and very supportive, I was recommended to the project by a friend-of-a-friend who had worked on it previously. The project proved to be fantastic: I was soon diving into the intricacies of molecular database formats and moderately gnarly OpenGL graphics programming, as well as helping design the app’s user interface. This was a perfect mix of advanced programming, design work and project management, and they were flexible enough to allow me to work from anywhere.

But come March, we were anxious once again: Chapel Hill had sent Kim an offer to join their program, but she was still on the waiting list for Santa Cruz. She asked me – should she just accept the North Carolina offer and get over it? I suggested – wait, it’s not an outright rejection, you’ll get in. And indeed she did: She got the call just as we were about to make our final decision, somebody else had ceded their spot on the program. When she called me with the news, it wasn’t a question of whether she should accept, she just started singing “California, here we come” into the phone. So that’s how we decided to go to Santa Cruz, sight-unseen.

“It was ludicrous, like being told that the tower suite in the Magic Kingdom castle was being prepared for our stay.”

We arrived in Santa Cruz for the first time in April 2014 to find accommodations and figure out school and daycare for our two young boys. There was still snow on the ground when we left Madison. As we walked along Seabright beach on our first day here, marveling at the feeling of the hot sand between our toes, pleasantly cooled by the occasional wave (nowhere near as freezing as the waters of the Great Lakes, by the way), a passer-by pointed past our shoulders, out to the sea, “look over there”. We turned to see a pod of dolphins swimming by. Neither Kim nor I had ever seen dolphins in the wild before. We looked at each other and started giggling uncontrollably – this place was going to be our home for the next year? It was ludicrous, like being told that the tower suite in the Magic Kingdom castle was being prepared for our stay. 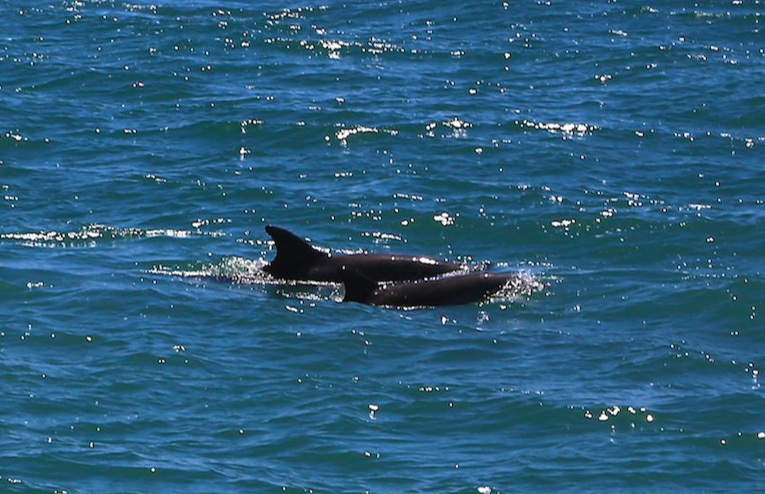 “Neither Kim nor I had ever seen dolphins in the wild before. We looked at each other and started giggling uncontrollably – this place was going to be our home for the next year?” (Credit: Maciek Smuga-Otto)

August 2014 came and after epic bouts of packing and furious preparations – we arranged to rent out our house in Madison to a visiting academic family – we crammed ourselves and our kids into a Mazda microvan for the cross country trip. The one advantage of doing things this way, I realized in retrospect, is that we felt no desire to drive back again, no matter what awaited us here. So, after way too many exhausting days on the road, we arrived in Santa Cruz.

“This one visit definitively shaped the next six months for me.”

Seemingly small decisions can have big consequences. Not trusting myself to possess the discipline to “work from home” on my contract project in this infinitely distracting town, I wandered into Cruzio’s downtown offices to inquire about their co-working option. I have no way of knowing what may have happened otherwise, but this one visit definitively shaped the next six months for me. My gambit to find a distraction-free workplace paid off on all sorts of levels: Most immediately, I was able to develop the iPad app peacefully and successfully.

“I had become more involved in this community in six months than I had back in Madison over the previous 20 years.”

But the real benefits came from the community that I found at Cruzio: Fellow developers, designers, entrepreneurs, artists – all of them interesting, opinionated, full of energy and ideas. I started to attend the New Tech Meetup, where I heard about seemingly countless local opportunities, and started reading Santa Cruz Tech Beat. I attended Cruzio’s Thursday bounce hours during which I had a chance to talk to even more interesting people, and realized that I had become more involved in this community in six months than I had back in Madison over the previous 20 years.

The opportunity that eventually paid off was the result of seemingly bad news at first: a major source of funding for my work with Digital World Biology in 2015 failed to materialize, and I was forced to start looking for local employment. Luckily, the UCSC Genomics Institute had just put out a call for software engineers, job openings I found on Santa Cruz Tech Beat’s jobs page. 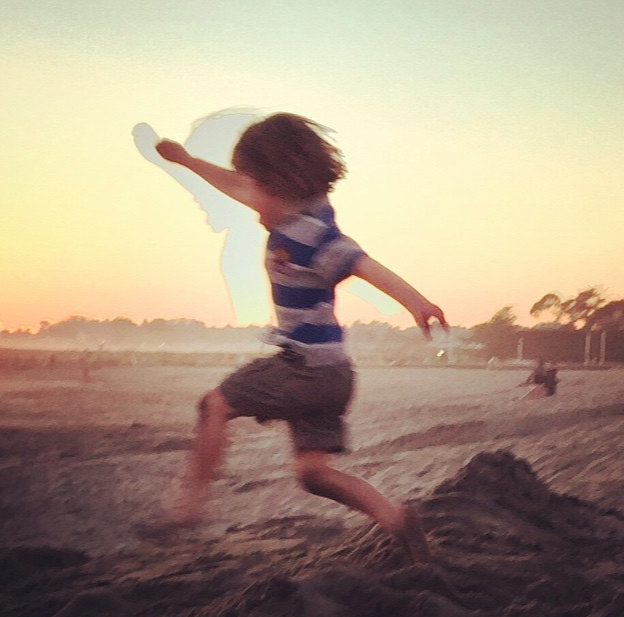 It’s now almost a year since we came here. We spent our first ever winter without snow, and didn’t mind it in the least. The kids acclimated fast – they discovered pump tracks (thanks Hilltromper!), the Derby skate park, and the slides at the “Blue balls” playground. We try to find the time every weekend to find a new hiking spot. We don’t always succeed, but it’s amazing what we’ve seen so far:  Big Basin Redwoods, Henry Cowell, Wilder Ranch, Nisene Marks, Pinnacles national park, Año Nuevo, Muir Woods, and more. We’ve started up new friendships – with families living in the University’s Family Student Housing where we’ve been staying up to now, and among the people who work at Cruzio.

I succeeded in landing the engineering job at the Genomics Institute at UCSC, and am now writing software to serve up genomic data in novel ways, satisfying my artistic impulses by illustrating scientific papers and posters on the side. Kim is freshly graduated from her program. It was every bit as intense, exhausting, nerve-wracking, eye-opening and wonderful as she hoped it would be. She made fast friends with her classmates, interned at the Monterey Herald and at Mercury News in San Jose, and will never again look at a newspaper story without appreciating how much work went into producing it. She’ll be spending the summer at an internship with the communications group for the Stanford School of Medicine.

“We’re not ever leaving this place, are we?”

At some point in the first two weeks of living in Santa Cruz, as we were walking along one of the beaches, Kim leaned over to me and whispered, “we’re not ever leaving this place, are we?” I whispered back, “nope.” And so we’re traveling back to Madison this summer, but only to sell our house there. We fell head-over-heels in love with Santa Cruz, and we’re staying. 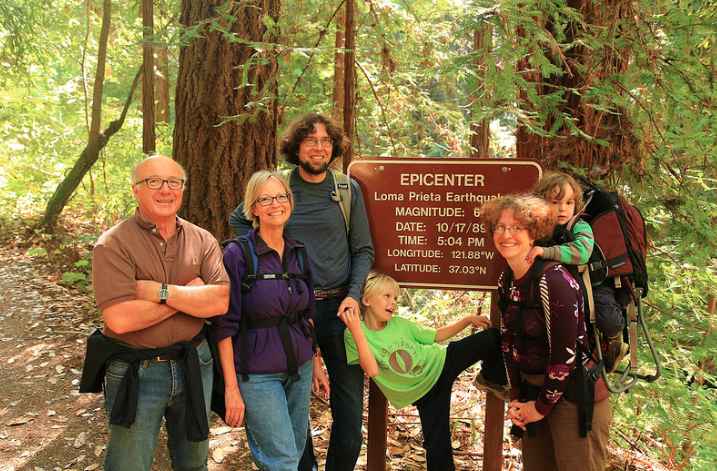 The author, Maciek Smuga-Otto, third from left, with family and friends getting ready to hike to the Epicenter of the Loma Prieta Earthquake. (Photo contributed.)

Maciek Smuga-Otto is a mathematician turned programmer turned designer turned iPhone developer. With a side order of comic artist. http://www.smuga-otto.com/