A Dad’s Perspective: Behind the Scenes at Futuristic Lights

Posted on May 28, 2015 by Sara Isenberg in Companies, Featured, Santa Cruz Tech Ecosystem 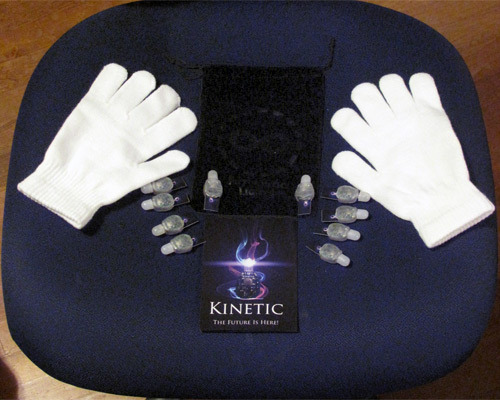 (Image above: Here is what comes in the set: 2 gloves, 10 lights with cases, diffusers, and batteries, a folded instruction card, and a black drawstring bag with the company logo printed subtly on it. Photo: contributed)

[Editor’s note: For background on Futuristic Light’s successful Kickstarter project, read Glove has a lot to do with it! published in Santa Cruz Tech Beat, 1/8/15. SCTB has another article about Kinetics shipping milestone in the works so stay tuned!]

I received my order of Limited Edition Kinetic lights from Futuristic Lights today (May 21, 2015)! I suspect that others who ordered Limited Edition sets will be getting theirs in the mail very soon also (the company started shipping on Tuesday—I got mine fast because I’m in the same county as they shipped from).

Note that there are 64 items that need to be assembled for each set: 2 gloves, 10 Kinetic boards, 10 cases, 10 diffusers, 20 batteries, 10 battery tabs, a drawstring bag, and an instruction card.  Even working very efficiently, it is probably going to take them a couple of weeks to get all the preorders shipped.  There’s no way that they could have afforded a standard “fulfillment” service for doing the shipping, as those generally set their prices based in large part on how many items need to be assembled for each order.

Component sourcing, manufacturing, packaging, and shipping have all been much more difficult than they anticipated, and they are shipping at the end of their estimated delivery time (even though they thought that they had allowed lots and lots of extra time—I thought that they would be able to ship in March, which shows how little help I was in anticipating what might go wrong for them). As it is, they are shipping without the boxes they had ordered, because the box printer was taking far longer to print the boxes than they had allowed for (and they hadn’t put a penalty clause in the order for late delivery). I suspect that they won’t be ordering from that box manufacturer again.

The amount that the founders of Futuristic Lights have learned from their first commercial product is amazing (way more than most engineering and business students get in four years of college), and they haven’t lost their enthusiasm for the process—they have already started work on the next 2 or 3 products. For those products, they’ll apply the lessons they learned on the Kinetics—they’ll have more realistic manufacturing lead times and will (probably) be able to reduce the manufacturing costs through better part procurement and different manufacturing partners.

Perhaps even more amazingly, my son has managed to maintain his part in the manufacturing and engineering effort while excelling on a full load of computer science and math courses at UCSB (in Winter quarter he had 24 units, instead of the standard 16, but he decided that the load was too much on top of all the engineering work he was doing for Futuristic Lights and dropped back to a saner load for Spring quarter). So far, most of his courses have been extensions of stuff he has learned partially on his own, and not all-new material. I suspect that courses may be a little more difficult next year as he tackles parts of computer science that he hasn’t already nearly mastered.