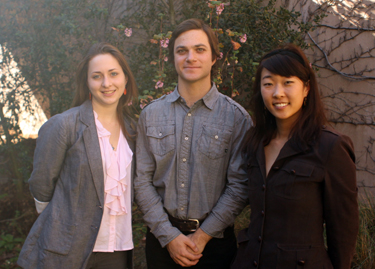 The UC Santa Cruz team will compete in the San Francisco regionals on March 13-14.

A team of UC Santa Cruz students has advanced to the regional finals of the sixth annual Hult Prize, the world’s largest student competition and start-up platform for social good.

Each year the Hult Prize, in partnership with President Bill Clinton and the Clinton Global Initiative, challenges students around the world to develop innovative social enterprises that aim to tackle pressing issues faced by billions of people.

The winners receive $1 million in seed capital, as well as mentorship and advice from the international business community to launch their newly formed company.

Regional rounds of competition are held each spring in Boston, San Francisco, London, Dubai, Shanghai and Sao Paulo, with a final round and awards ceremony held at the Clinton Global Initiative annual meeting each fall.

Each team will present their case at the regionals for how they would provide sustainable, high-quality early education solutions to 10 million children under the age of six in urban slums.

“It’s a social justice-through-music education program,” she added. “Engaging children in music from a very early age breaks down barriers, from socioeconomic to language, and to special needs.”

Lee has been teaching violin after school at Gault Elementary in Santa Cruz for the past three years, as part of an El Sistema program for children who can’t afford music education.

“Terre, Kymberley and Justin represent the best of UCSC students both in the classroom and in our community,” notes UC Santa Cruz economics professor David Kaun. “Their work with Gault School’s El Sistema program is bringing music to young students, enriching their lives in ways that would not have happened otherwise. The Hult Prize will enable their efforts to expand many times over throughout the community.”

The Hult competition is designed to give student entrepreneurs from around the world a platform to innovate and revolutionize the way society thinks about servicing the poor. The prize money is seeded into the newly created company, which will be run by the student team that came up with the idea.

The UC Santa Cruz team will compete in the San Francisco regionals on March 13-14.

Regional winners will then pitch their start-up at the Clinton Global Initiative annual meeting, where the winner will receive $1 million.