Passive Cleaner Boat Bot could keep microplastics out of oceans 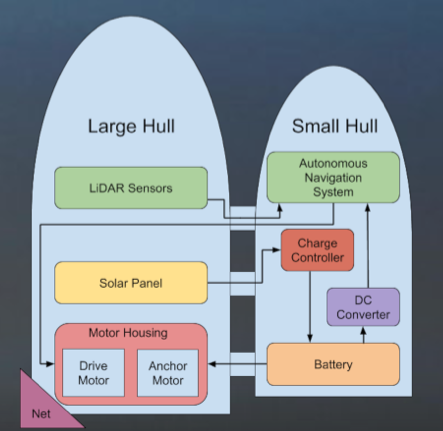 (Image above: The Passive Cleaner Boat Bot — PCBB — would passively drift along coastlines to collect garbage deposited into the ocean by rivers. Source: BSOE website.)

For their final project as undergraduates, a team of students at the Baskin School of Engineering is building an autonomous boat and net system that would passively drift along coastlines and collect garbage deposited into the ocean by rivers. The Passive Cleaner Boat Bot (PCBB) could prevent plastic waste from drifting out into the open ocean where it becomes much more difficult to remove.

“We want to prevent macro plastics from breaking down into smaller pieces that harm our ecosystem and wildlife and, eventually, us. We eat the fish, we breathe oxygen that the ocean helps provide. We want to make the ocean a cleaner place for all of us,” said Arina Romanova, the team’s solar lead and treasurer.

The tiny particles of plastic that have already made their way into the ocean aren’t going away any time soon. The estimated 15 to 51 trillion pieces of microplastic in the world’s oceans, altogether weighing up to 236,000 metric tons, could take hundreds or thousands of years to degrade.

The majority of plastic waste makes its way to oceans after being dumped in the rivers and waterways of developing countries where regulations on plastic disposal are lax or nonexistent. By being stationed at the mouths of these rivers, the boat bots could collect the discarded plastic before it reaches the open ocean and degrades into smaller pieces.

“Our system is more efficient and effective than projects aimed at removing waste way out in the deep ocean because by stemming the problem at the source, we won’t have to deal with it later when the waste is so much harder to remove,” said Richard Alves, the team’s safety officer.

The students are currently working on their first PCBB prototype. They lacked funding for purchasing their first boat, so the team used their own money to buy one that they will modify by adding electronics, sensors, GPS, photovoltaic equipment, and a motor to control the boat’s anchor. Santa Cruz company Day One Solar has donated a solar panel to power the prototype and Alterra Solar will donate a second one. The PCBB will initially be tested in the OPERS pool before eventually being sent out into open water for further testing. The team plans to build their second prototype from scratch, rather than modifying pre existing boats, in order to better optimize their design.

The students see immense value in working as a team to try to solve a real-world issue for their senior capstone project. “It’s important to get this hands-on learning and industry experience that we’ll use in our careers. We’ve received all this knowledge as engineering students at UC Santa Cruz. Now, let’s put it to the test,” said Romanova.

You can support this project by making a donation this Giving Day—February 27, 2019.