Internet of Things: Focus on Vodafone 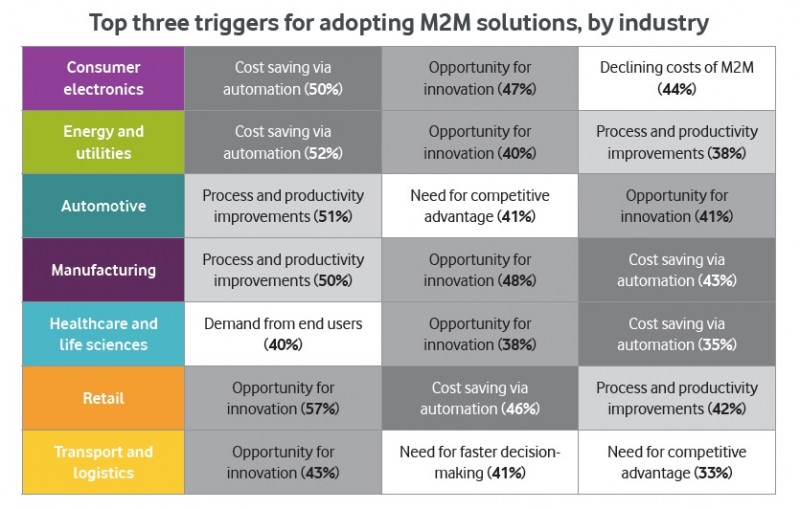 (Image above is from Vodafone M2M Adoption Barometer 2014. Courtesy of Vodafone) 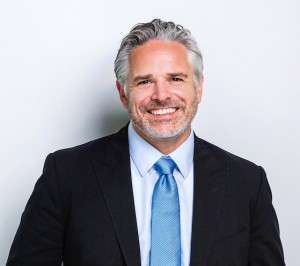 While I live and work in Santa Cruz, CA, which is seeing more Internet of Things (IoT) startups, it was a pleasure speaking with Andrew Morawski, Head of M2M Americas at Vodafone. Vodafone Group Plc is one of the world’s largest telecommunications companies providing a wide range of services including voice, messaging, data and fixed broadband for 438 million mobile customer across 26 countries and partners with mobile networks in over 50 more. The Group’s operations are split into two geographic regions –Europe and Africa, Middle East and Asia Pacific (AMAP).

What was an eye opener for me was the company’s leadership position in M2M, a huge opportunity in the overall Internet of Things ecosystem. According to Statista, the M2M market was around 45B USD in 2013, and is predicted to reach 200B USD in 2022, at a CAGR of 18 percent.

Per Andrew, Vodafone’s M2M business since 2011 has been:

Morawski noted that Vodafone has been in the M2M business for almost 20 years, but that M2M has become a strategic “pillar”for the company under CEO Vittorio Colao, which the growth bears out.

He said that the success of the company’s M2M growth was due to their global M2M platform.

Morawski said, “We designed our own M2M platform over our global mobile network infrastructure. Our mission is to connect every machine in order to transform life and business. As well as enabling companies to increase efficiency and ROI, we focus on real applications that are making a difference in people’s lives.”

As Morawski pointed out, because of Vodafone’s global connectivity network, there is no extra work in expanding applications around the world. It’s the same SIM (subscriber identity module) that can be plugged in any country without modification.

Some of these applications include:

Lively: Lively wanted to launch a new system of remote sensors that would enable families to monitor the movements of their older relatives. Vodafone Global M2M SIMs provides the worldwide coverage for the sensors to upload activity data wirelessly, without the need for home Internet or phone line connections. The sensors are preinstalled with a Vodafone Global M2M SIM to upload activity data wirelessly. An additional hub receives activity signals from each of the sensors to compare daily events with normal routines. That information is then shared with relatives via a secure login that can be accessed through PCs, tablets or smartphones.

Amazon: Vodafone enables Kindle Paperwhite 3G users to have the ability to download a book in more than 150 countries. They provided an intelligent SIM for the Kindle Fire HDX in UK and Germany that recognizes its location the moment it’s activated.

The “Vodafone M2M Adoption Barometer 2014” study includes conversations with 600 executives in 14 countries across five continents about their experiences with M2M as well as their predictions for the future. The study provides a useful definition of M2M:

“Although the terms are often used interchangeably, Machina Research sees a very definite distinction between M2M and IoT. M2M is, effectively, the plumbing for IoT. M2M involves connecting devices and transferring data. This is something that the IoT depends on. However, M2M typically involves an application developed to solve a particular need. IoT replaces these ‘stovepipes’ with common application platforms, where data from lots of different sources can be ‘mashed-up’ together, and where developers can build new apps without having to start from the ground up. To give an analogy, M2M is like your mobile connection, while IoT is Facebook, Google,and all the apps that you use on your PC or phone. With IoT, developers no longer needto do the equivalent of inventing the iPhone every time they want to create an app”.

In a worrisome trend for North and South America, the report notes, “Adoption in Africa, the Middle East and Asia-Pacific (AMEAP) has leapt 15 percentage points since 2013. Europe wasn’t far behind, but the Americas saw relatively sluggish growth of just four percentage points.” But, Vodafone thinks this will narrow considerably in two years. It still makes me wonder why the Americas are behind!

The report includes an excellent graphic of what benefits to M2M respondents saw.

IoT Perspectives agrees with Morawski’s belief that, while the automated home is interesting, at the moment it is a “nice to have”rather than a “must have, although Vodafone plays in smart homes via connectivity.”At the same time, Andrew added, “We are doing more in the consumer space”as the case studies above attest.
Vodafone is a member of W3C, “that has announced a new Web of Things initiative to develop Web standards for enabling open markets of applications and services based upon connected sensors and actuators (the Internet of Things) and the Web of data…the World Wide Web Consortium (W3C) is an international community that develops open standards to ensure the long-term growth of the Web.”Surprisingly, we don’t see Vodafone as a member of the relatively new, but expected to be influential, Industrial Internet Consortium (they work with standards groups) formed by AT&T, Cisco, GE, IBM and Intel, and which is working on security and interoperability for M2M. We’ll be profiling the IIC since its membership and focus is impressive.

As Andrew discussed, M2M is an exciting space, especially as one considers connected car and eHealth. He explained that the company would continue to expand into what customers need, including, potentially, analytics. M2M is already touching all our lives, including here in Santa Cruz.

Special to Santa Cruz Tech Beat – The above based on an article in IoT Perspectives – www.iotperspectives.com