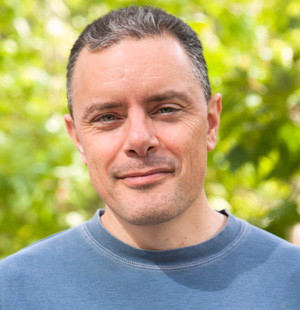 (Michael Mateas, above, is chair of the new Department of Computational Media. Photo credit: C. Lagattuta)

With the creation of a Department of Computational Media in the Baskin School of Engineering, UC Santa Cruz has established an academic home for a new interdisciplinary field that is concerned with computation as a medium for creative expression.

The new department, which builds on the strong programs UC Santa Cruz has established in computer game design, is the first of its kind in the world, said Michael Mateas, chair of the department and director of the Center for Games and Playable Media at UCSC.

“There is a growing recognition that computer games as we know them today are just the tip of an iceberg,” Mateas said. “Games are the harbingers of a new, fundamentally computational, and deeply interactive medium. It’s like cinema at the beginning of the 20th century. We’re seeing the birth of a fundamentally new form of expressive communication, and we have a leadership role in helping to invent it here at UC Santa Cruz.”

The Computational Media Department will oversee the existing B.S. degree in computer game design, as well as the M.S. degree in games and playable media (pending approval of the transfer). New degree programs are also being planned. The faculty of the new department includes six tenure-track faculty and five adjunct faculty, drawn primarily from the departments of Computer Science and Computer Engineering.

As a discipline, computational media combines the theories and research approaches of the arts and humanities with those of computer science to analyze, explore, and enable the computer as a medium for creative expression. In addition to games, other examples of computational media include social media, smart-phone apps, and virtual reality experiences. The common thread among all of them is that they require large amounts of computation and feature a level of interactivity that can only be created through computer technology.

While the World Wide Web and social media are already shaping our lives, and computer games are a major industry, other types of computational media are just beginning to emerge, according to Noah Wardrip-Fruin, an associate professor of computational media (formerly in computer science). “Here at UC Santa Cruz, for example, we’re inventing technologies for deeply interactive storytelling, which can be used in games, but also for very different experiences,” he said.

In 2012, UC Santa Cruz hosted Media Systems, a workshop on computational media sponsored by the National Science Foundation, National Endowment for the Arts, National Endowment for the Humanities, Microsoft Studios, and Microsoft Research. With participation from a broad range of university and industry leaders, the workshop led to a report, ‘Envisioning the Future of Computational Media,’ that was published in March of this year.

As an emerging discipline, computational media has not fit comfortably within traditional academic programs. In this respect, it is similar to another interdisciplinary field in which UC Santa Cruz has played a leadership role, namely bioinformatics, which combines biology and computer science. Many aspects of computational media are well beyond the concerns of computer science, yet it demands a level of technical engagement that does not fit well with more arts- or humanities-focused programs involving digital media.

Design and technology are deeply intermeshed in computational media, as seen in the pioneering work of the department’s founding faculty in areas such as human-computer interaction, interactive storytelling, natural language dialog, and procedural content generation. In addition to Mateas and Wardrip-Fruin, faculty in the new department include Arnav Jhala, Sri Kurniawan, Marilyn Walker, and Jim Whitehead.

“We invent technologies for new kinds of playable simulations that enable new types of games that aren’t possible today. We then design innovative new interactive experiences, which suggest new possibilities for technology research,” Mateas said. “The training our students receive in this approach makes them highly competitive in the job market.”

According to Mateas, colleagues at other institutions have responded enthusiastically to the idea of a computational media department. “They are interested in what we are doing here at UC Santa Cruz as a model for their own institutions,” he said.