Posted on May 28, 2014 by Sara Isenberg in Events, Santa Cruz Tech Ecosystem, UCSC interns
Share This: 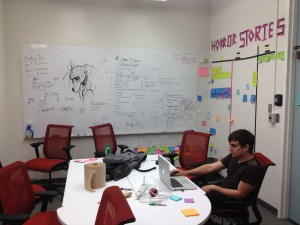 Orlando Salvatore, a senior in the Game Design sequence, puts the finishing touches on his team’s game Horror Stories in the Gaming Lab at UCSC.

As UCSC’s spring quarter draws to a close, a group of committed game design students are working furiously to put the final touches on their entries for the 2014 Sammy Awards. The annual ceremony, which will take place at Santa Cruz’s Rio Theater on June 13, is organized by the UCSC Center for Games and Playable Media. For the students in the CMPS 172 Game Design Sequence class, the Sammys are the culmination of over a year of work. Under the guidance of Professors David Wessman and Jim Whitehead, they’ve developed their initial concepts to the point where the goal is beginning to be realized: by now, their games are fully playable, and in various stages of alpha and beta release. There are fourteen games in the running this year.

Stylistically, they’re diverse. 2014’s competition will see everything from platformers, tower defense games, and puzzle games, to interactive narrative games and entries in the survival horror genre. The wide span of genres is intentional. “It not only gives students the opportunity to work on different kinds of games, but also gives a better variation in the class so not everyone’s stirring the same pot,” says Orlando Salvatore, lead producer on Horror Stories, a first-person multiplayer survival game. His team – consisting of eight developers and fourteen artists – is one of the largest groups currently at work. Salvatore combined an interest in music with a burgeoning passion for programming when he began attending UCSC, and found the Game Design sequence to be a perfect fit for his interests.

“I think it gives students a lot of opportunity, not only in creating a pseudo-professional environment, but also to really flex your muscles in different areas that you may not be comfortable with,” says Salvatore.

Students that hope to transition from the Game Design major to a professional studio may find inspiration in the lineup that will judge this year’s Sammys. It includes a number of UCSC alumni who have gone on to prominent positions in the industry. These judges will award their chosen games with honors including the Technical Achievement Award, the Audio Award, the Peer Choice Award (voted on publicly), and the coveted Grand Prize. But, “right now, it’s all about looking for bugs and putting in that extra level of polish,” says Salvatore. When the games are complete, they’ll be demonstrated at UCSC on June 13th. Afterwards, students will descend on the Rio Theater to receive their awards.

Be sure to look out for Santa Cruz Tech Beat’s coverage of the event.

Tyler Walicek is a literature student at UCSC.