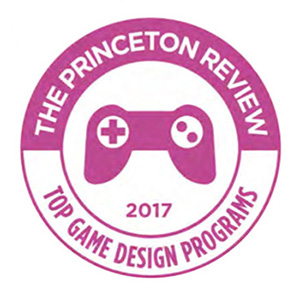 As in past years, UC Santa Cruz is featured on Princeton Review’s 2017 lists for top undergraduate and graduate programs in game design

The game design programs at UC Santa Cruz were named among the top programs in the country by the Princeton Review, an education services company. The undergraduate and graduate programs at UC Santa Cruz were both ranked in the top 25 in the company’s lists for 2017 of the best undergraduate and graduate schools for students to study game design and launch a career in the game industry.

UCSC offers a broad range of programs in computer game design. The Baskin School of Engineering established the first undergraduate major in computer game design in the UC system in 2006. The campus also has three graduate programs with an emphasis on games: the professional M.S. in games and playable media; the Ph.D. or M.S. in computational media; and the M.F.A. in digital arts and new media.

The Princeton Review based its rankings on a survey it conducted in 2016 of 150 institutions offering game design coursework or degrees in the United States, Canada, and some countries abroad.

For more information about the game design programs at UC Santa Cruz, visit the web sites for the Department of Computational Media and Digital Arts and New Media.