[Editor’s note: In May, Santa Cruz Tech Beat published Aspiring UCSC game designers hope for recognition at the Sammy Awards as students were putting the final touches on their games in anticipation of The Annual Sammy Awards.] 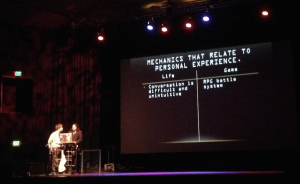 Last Friday, hundreds of UCSC students and their families gathered at Santa Cruz’s Rio Theater for the 4th annual Sammy Awards. The awards represent the culmination of the Game Design sequence at UCSC – a multi-year series of classes that give students the skills they need in programming, animation, art, and design to succeed in the blossoming field of video game creation. The students built over 130 games this year, which were demonstrated to eight judges. This panel consisted of a number of experts in the field, including Alice Carter, a professor of animation at San Jose State, Steve Horowitz, founder of the Game Audio Institute, and AJ Glasser, a developer of independent games at Facebook.

The ceremonies opened with the jazz band Terminal Degree, which featured dual saxophones and a guest vocalist. They covered a number of selections from game soundtracks, including the theme from Chrono Trigger, as well as a number of more traditional jazz standards.

By 7:00 P.M., the crowd was energetic and anticipatory. Professor Jim Whitehead, Chair of Computer Science at UCSC, served as the charismatic host of the evening, dressed for the part in a tuxedo. He provided anecdotes from the year, as well as explanation of the unique challenges faced by each student-run design group. After his opening remarks, the top twenty games were screened to the audience.

Each team gave a short introductory presentation followed by a gameplay video. The students of Foundations of Game Design – the first class in the sequence required to earn the major – rolled out a series of 2D platformers and mobile-style games, including Vis-à-Vis, Cat Escape: Meow Or Never, Cocooned, and Bar Crawl.Interspersed with these early efforts were the impressive, 3D worlds of the Game Design Experience Class.

On display in all games was an impassioned blend of the imaginative and the technical. The amount of complexity involved in video game design is staggering, and the results that such small groups of college students were able to achieve over the course of a year were remarkable. However, some games came together with particularly strong results, and the judges recognized these with a selection of eight prizes:

Tyler Walicek is a literature student at UCSC.