Posted on May 10, 2014 by Sara Isenberg in Events, Santa Cruz Tech Ecosystem, UCSC interns
Share This:

During An Evening With Guy Kawasaki LIVE, Kawasaki spoke about the subject of his most recent book, “Enchantment: the Art of Changing Hearts, Minds and Actions.” In his talk, he detailed techniques for catalyzing “enchantment” for customers and tech users alike. 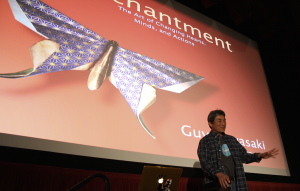 Guy began the evening with a story of his connections to the community of Santa Cruz, pointing out his best friend and business partner of 30 years, local Santa Cruz community member Will Mayall to the audience.

Gesturing at a slide of the theater’s marquee, Guy joked, “I’ve never been billed with ‘Clueless’ before,” inspiring laughs throughout the crowd after comically adding, “This is kind of a big day in my life. I have truly arrived.”

Summarizing the major points in his presentation, Guy highlighted the importance of incorporating Santa Cruz with the worldwide technological community, saying that the process of “enchanting” people will inevitably include communities like Santa Cruz that are as “Deep, Intelligent, Complete, Empowering, and Elegant” as their products and creators.

Before Guy’s presentation participants met to network and talk about Santa Cruz’s tech economy and community.

Mark Mesiti-Miller, of Mesiti-Miller Engineering, Inc. said that, “Santa Cruz is like a vegetable garden, it’s alive and vibrant and flourishing,” adding that he thought Guy’s presence at the evening’s event was a testament to the abilities and initiatives of the growing tech community in Santa Cruz.

“The connections between the community and tech world is part of what makes Santa Cruz unique,” stated Economic Development Manager J. Guevara at the event, adding, “Guy’s going to light it up! It is a sign that there is a movement here growing in Santa Cruz. It’s a testament to the overall community. We’re all contributing”

During his introduction to the event, founder Doug Erickson said, “We’re doing this because we love all things cool, geeky, and Santa Cruz,“

When asked about the importance of Guy’s presentation, Erickson added, “[Guy] is a motivator. He’s massively involved in the whole tech start up scene. He gets people interested in developing their tech.”

During the Q&A portion of the event Guy stated that to him the key to Santa Cruz being a tech powerhouse is the School of Engineering at UC Santa Cruz. He believes that the connection that Santa Cruz has to the school underlines an environment predicated on supporting innovative students and dynamic technological initiatives. Guy mentioned that UCSC’s engineering programs are nimble and rigorous.

Kawasaki’s model for success includes combining intensive ethical standards with economic development and success. His belief that ethics and success do not have to stand at odds mirrored the sentiments of many participants at the event.

Kevin Romero is a literature major at UC Santa Cruz who is currently writing his first collection of short stories. He is an editorial intern at Santa Cruz’s Catamaran Literary Magazine and the Chicago Quarterly Review. Otherwise, he spends his time collecting more books and movies than he has space for on his shelves. He can be reached at his LinkedIn profile or by email at ksromero@ucsc.edu