In order to create a great company you need certain values and they’re all present in Santa Cruz.

“The essence of great evangelism—and I believe marketing—is that you create or associate with something great.” 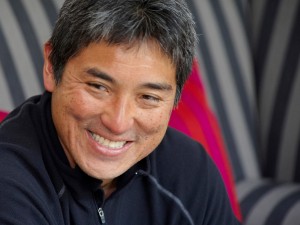 It’s an application of Kawasaki’s famous rule that he calls Guy’s Golden Touch. “It’s not whatever I touch turns to gold—I wish that were true! It’s that whatever is gold, Guy touches.”

“The key to marketing something like Santa Cruz is that it is great,” Guy Kawasaki says. “It’s that simple.”

As one of the most sought-after speakers, business advisors, and tech evangelists in the world, Kawasaki knows how to find gold. He’s served as an advisor to Google’s Motorola business unit; he was chief evangelist at Apple; he founded AllTop.com and Garage.com and Fog City Software, among others. Billionaire Richard Branson reportedly shined his shoes.

He’s on his way to speak to Santa Cruz on May 7 at the Del Mar.

“I’m going to help making enchanting people even more enchanting,” he says of his upcoming talk. The subject is based on his hit book, Enchantment, a manual to “influence people’s hearts, minds, and actions…to bring about voluntary, enduring, and delightful change.” Again, he’s not a novice with this stuff.

“You want to create a great company: a great company needs great products. To get great products, you need great people; to get great people, you need to offer them a good lifestyle,” he says. “What does that mean? Being near the beach helps. Not having 80-hour workweek expectations, not being cutthroat. Basically, Santa Cruz values. I hate to make it sounds so trivial but that’s ‘quote-unquote’ all you need.”

He sees the ingredients for an ideal tech and business utopia at work in Santa Cruz.

Guy Kawasaki emits an endearing, enigmatic humor, a kind of “it’s funny because it’s true” simplicity that is the undercurrent of wisdom. “I don’t consider myself that smart,” he says. “But there are not many people who can outwork me.”

Kawasaki “learned to sell” at Nova Stylings, a fine-jewelry manufacturer, where he worked during business school. He names it as one of the most vital learning experiences in his life and career.

“[Selling] was a skill—it wasn’t a situation where things just flew off the shelf,” he says of jewelry. “Many people who are always in tech, they don’t realize how hard it is to sell stuff.”

All of life is selling

“All of life is selling really,” he says. “I can’t think of a profession where you’re not selling. Sales is obvious; marketing is obvious. If you’re a minister, you’re trying to convince people of a certain thing, right? I think people who make progress and succeed in life at some level are all selling. They are pitching themselves as a solution, as an employee, as a something.”

If that feels coldhearted, hold on, because Kawasaki is anything but. “The difference between evangelism and sales is that an evangelist has the other person’s best interests at heart.”

“When I evangelized Macintosh, I truly did believe that a person should buy a Macintosh because it was the best computer for them and it would change their life,” Kawasaki says. He remembers Macintosh opening his eyes to what computers would be able to do for regular people. Kawasaki is driven in a big way by the democratization of tech, and he saw that Macintosh would equalize computing.

Most recently, he signed on as chief evangelist for Canva, a graphic design tool that he says will “equalize design.”

“I can’t stand situations where people are held back by artificial factors—such as race, gender sexual orientation, anything like that. I also can’t stand disparity where some people have computing power and some people don’t, just because of money or pedigree.”

“Altruism is too strong a word,” he says. He maintains that the evangelist inherently has a conflict of interest; he’s still paid to preach. “That doesn’t mean I’m unethical.”

Morals and money aren’t at odds

Kawasaki’s business model is a reassurance that morals and money aren’t necessarily at odds, and neither are career success and lifestyle satisfaction—in fact, they go better together.

“In order to create a great company you need certain values and I think they’re all present in Santa Cruz,” Kawasaki says. “It’s kind of the best of both worlds.”

For more information on and tickets for Guy’s May 7, 2014 talk at the Del Mar Theater, sponsored by Santa Cruz New Tech Meetup in partnership with Bookshop Santa Cruz, visit http://www.meetup.com/santacruznewtech.