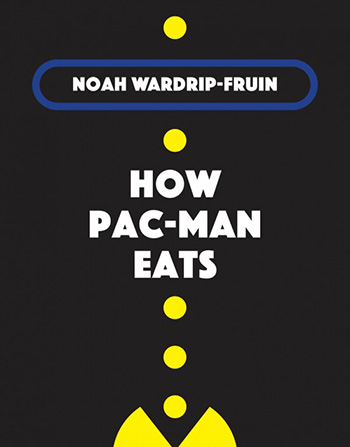 In a new book, Computational Media Professor Noah Wardrip-Fruin shows how the fundamental mechanics of games shape their capacity to address important topics

Since the early days of pioneering games like Pong and Pac-Man, computer games have grown dramatically more complex and sophisticated, not only in the fundamental mechanics of how they work, but also in their ability express ideas and address important topics.

In his new book, How Pac-Man Eats (MIT Press, December 2020), Noah Wardrip-Fruin argues that these two aspects of games are intrinsically linked, and that a new game can fail if there is a mismatch between the game’s mechanics and its theme.

“One of the big questions is how we can make games that are about things like social or political or personal topics, given the limited vocabulary for how games can work,” said Wardrip-Fruin, a professor of computational media at UC Santa Cruz.

In the new book, he shows how game developers build playable models using a vocabulary of what he calls “operational logics.” He then explores what kinds of themes can be addressed with different kinds of playable models.

“I talk about some failed examples, like a version of Tetris that was about slavery, or a version of Monopolyabout a boy band,” Wardrip-Fruin said. “If there’s no relationship between how the game is played and its theme, it doesn’t work, but many people, including some game makers, don’t seem to be able to look at the system of a game and think about what that system can express.”

The relationship between the underlying system and the theme can be relatively direct, but it can also be powerfully metaphorical, he explained. “It’s something that artificial intelligence would have a hard time with, because it’s hard to predict metaphorical uses,” he said. “It’s a feat of creativity.”

The book’s title refers to what was at the time a breakthrough in the metaphorical use of game mechanics, although now it seems so obvious it’s hard to recognize how innovative it was. One of the fundamental elements in the vocabulary of game mechanics is collision, which was used effectively in the early videogame Pong to bounce a ball back and forth between two paddles. Pac-Man introduced a new approach, expanding the use of collision to “mean” consuming something, as Pac-Man eats pellets scattered around a maze.

“At the time, that was a big deal, but now we can barely see it as anything special,” Wardrip-Fruin said. “In more recent games, collision is used to mean many different things. Another common element is resource logic, like the use of money in Monopoly, which has been used in other games to say different things about how resources exist in our world.”

The book describes strategies game creators use to expand what can be said through games, with examples drawn from indie games, art games, and research games that address themes ranging from border policy to gender transition. These include Papers, Please, which illustrates expansive uses of pattern matching; Prom Week, for which the game’s developers at UCSC created a model of social volition to enable richer relationships between characters; and Dys4ia, which demonstrates a design approach that supports game metaphors of high complexity.