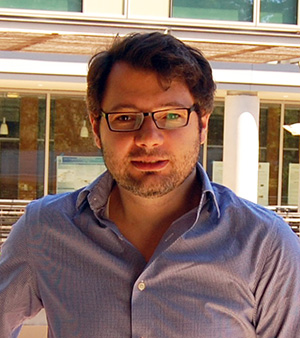 (Photo: Ali Yanik is an assistant professor of electrical and computer engineering in the Baskin School of Engineering at UC Santa Cruz.. Source: UCSC)

For over ten years, Ali Yanik has been working to develop novel biosensor technology to provide rapid, low-cost testing for disease diagnostics and precision medicine. Now, with a five-year, $3.7 million grant from the National Institutes of Health, he and his collaborators are poised to complete the development and validation of a prototype and begin testing it in the field for detection of dengue fever, yellow fever, and Zika virus infections.

“We’re confident in being able to do this and get it into the field for testing,” said Yanik, an assistant professor of electrical and computer engineering in the Baskin School of Engineering at UC Santa Cruz. “It’s pretty revolutionary because this is a very simple tool, and yet it is also very sensitive.”

Zika, dengue, and yellow fever are widespread viral diseases transmitted by mosquitoes in tropical and subtropical areas. The lack of accurate and rapid field diagnosis is a serious obstacle to controlling these diseases in areas where they are endemic. Sophisticated laboratory tests based on the polymerase chain reaction (PCR) method can diagnose active infections, but these tests are not readily available in developing countries. As a result, many cases are discovered late, allowing uncontrolled transmission and massive outbreaks.

The gold-standard technique for protein detection, called ELISA, is a complex laboratory assay and, like PCR, is not readily available in developing countries. In preliminary experiments with serum samples, Yanik’s team found that their SPeeD assay was at least 10,000 times more sensitive than the most advanced ELISA tests in detecting viral proteins. The SPeeD assay also has high specificity, reliably detecting dengue virus proteins within a much higher background of Zika virus proteins.

Yanik’s collaborators include infectious disease specialists at Stanford University School of Medicine and at St. George’s University in Grenada. Benjamin Pinsky is medical director of the Clinical Virology Laboratory for Stanford Health Care and has ongoing research projects in Grenada; Desiree LaBeaud is a professor of pediatric infectious diseases at Stanford who has been studying insect-borne viral diseases in Kenya and Grenada; and Calum Macpherson is an epidemiologist and dean of graduate studies at St. George’s University and director of the Windward Islands Research and Education Foundation (WINDREF).

The project will take advantage of established disease surveillance programs in Grenada, where field testing will be conducted. Yanik said the researchers plan to spend the first three years of the grant period focusing on technology development and validation, using serum samples from disease surveillance programs in Kenya for testing and comparison with PCR results. Then they will begin testing the prototype in Grenada, first in a hospital setting and later in field clinics.

“They won’t be using it to make clinical decisions during the trials, but will run it in parallel with more complex, clinically-approved tests to see if the results match,” Yanik explained.

The system will be designed to provide diagnostic results within less than 35 minutes using blood samples of less than 100 microliters, at a cost of $2 per test.

The SPeeD assay technology overcomes a fundamental problem for biosensors known as the mass transport limit, which refers to the difficulty of getting the target molecules in a sample to the sensor surface efficiently. Yanik’s team integrated an optical sensor with lab-on-a-chip technology to create a novel, compact platform that can rapidly process samples to detect protein targets with extremely high sensitivity. The assay provides quantitative results enabling clinicians to determine the viral load in a sample without resorting to enzymatic amplification schemes.

“There are no simple, point-of-care viral load tests available in the developing world,” Yanik said. “There are low-cost assays for antibodies, but those don’t identify active infections, and because these diseases are common in the areas where they are endemic, many people have antibodies from past infections. An antibody test won’t tell you which disease is causing a patient’s symptoms.”

Viral antigens are harder to detect than antibodies because they are present at much lower concentrations. The SPeeD assay is so sensitive, however, it can detect as few as five to 10 viral particles in a 100-microliter sample, Yanik said.

“Usually, there is a trade-off between sensitivity and simplicity, but we’ve shown you can achieve both,” he said. “Ultimately, this platform can be used for all kinds of disease diagnostics, including detection of other viruses such as Ebola and coronavirus, as well as early detection of cancer biomarkers.”