Narinder Kapany, known as the ‘father of fiber optics,’ dies at 94 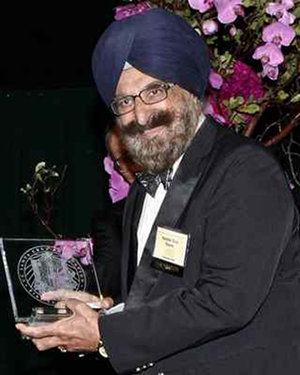 Narinder Singh Kapany, a pioneering scientist, entrepreneur, and philanthropist who served as a Regents Professor at UC Santa Cruz and a trustee of the UC Santa Cruz Foundation, died on Thursday, December 3, at age 94.

Often described as the ‘father of fiber optics,’ Kapany introduced the term in a 1960 article in Scientific American, wrote the first book about the new field, and played a prominent role in advancing the field both as a researcher and as the founder of several optical technology companies.

Kapany was a Regents Professor at UC Santa Cruz from 1977 to 1983. In 2008, he was honored with the UC Santa Cruz Foundation’s Fiat Lux Award in recognition of his outstanding achievement, dedication, and service in support of the university’s programs and goals.

Born in India, Kapany went to England for graduate school and spent the bulk of his career in the United States. A graduate of Agra University in India, he completed advanced studies in optics at Imperial College London and received his Ph.D. from the University of London in 1955. As a graduate student working alongside Harold Hopkins at Imperial College in 1953, Kapany was the first to successfully transmit high-quality images through a bundle of optical fibers.

His research and inventions have encompassed fiber-optics communications, lasers, biomedical instrumentation, solar energy, and pollution monitoring. He started several companies in Silicon Valley, earned over 120 patents, and was a member of the National Inventors Council. A fellow of numerous scientific societies including the British Royal Academy of Engineering, the Optical Society of America, and the American Association for the Advancement of Science, he received many awards and honors, including the Excellence 2000 Award from the USA Pan-Asian American Chamber of Commerce and the Pravasi Bharati Samman Award from the Government of India.

Kapany founded UCSC’s Center for Innovation and Entrepreneurial Development (CIED). As its first director, he was instrumental in convening national thought leaders in academia, industry, and government to discuss and learn about the role and impact that innovation and entrepreneurship play within the university.

A noted philanthropist, Kapany was deeply committed to championing Sikh culture and language, creating the Sikh Foundation in 1967. In 1998, he endowed a Chair of Sikh Studies at UC Santa Barbara. He donated his family’s collection of Sikh art to the San Francisco Asian Art Museum and funded a gallery for its display in 1999.