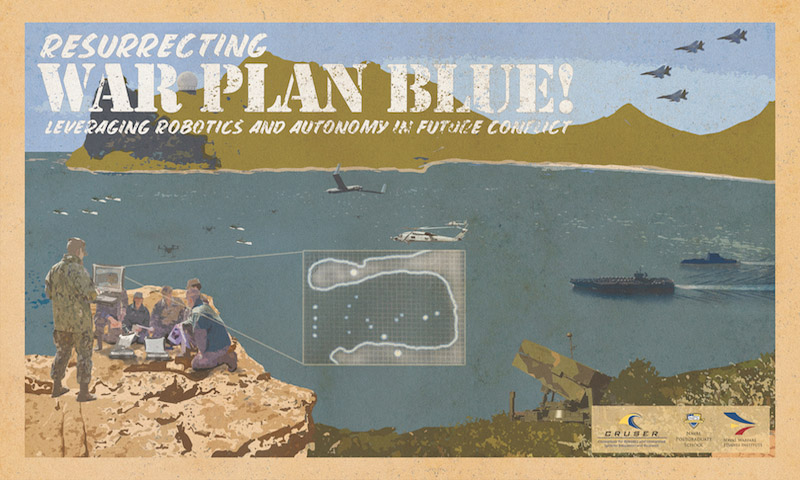 (Image above: How will emerging technologies contribute to enhancing the resiliency of naval forces? How do we best prepare for war with peer competition? With robotics? The latest Warfare Innovation Continuum (WIC) Workshop explored these questions with 150+ participants from the naval services and beyond. Source: NPS website)

The Naval Postgraduate School (NPS) recently concluded an intense concept generation workshop to explore new ways to augment the nation’s resilience and ability to prepare for war – should the need arise – in a world increasingly defined by peer competition and robotics warfare.

“This workshop works because we come together as a community of people who care about what happens in the future, and how to potentially integrate emerging technologies to make it a better future,” noted NPS Department of Operations Research Professor of Practice, retired Navy Capt. Jeff Kline. “One hundred percent of the participants walk away with a better appreciation for the challenges we have in the future and for the talent across the services and industry we have to address those challenges.”

The virtual environment enabled this community to come together in an unprecedented way from far and wide, from across the Fleet and around the world.

Over 150 registered participants attended the workshop. In addition to attendees from industry and civilian academia, representatives from the Office of the Chief of Naval Operations, several systems commands, the National War College and Marine Corps University were present, as well as sizable contingents from Singapore, Romania, Israel and Colombia.

Participants were presented with a vexing hypothetical scenario: in the wake of the COVID-19 pandemic and the rise of segregated, national economies and great power competition, prepare the nation to respond to international crisis and eventual armed conflict by 2035. Specifically: how might emerging technologies; concepts; joint, combined and coalition forces contribute to enhancing the resiliency of naval forces, logistics, and support facilities in an extended campaign against a peer adversary? Workshop participants delivered.

Under the mentorship of seasoned group facilitators from NPS, the Naval War College, the Naval Surface Warfare Center and other organizations, six concept generation teams were formed to dive deep into these complex problems. Over the course of the workshop, they presented nearly 30 conceptual solutions; from these, nine were selected as concepts of interest which will be disseminated throughout the Navy.

On the final morning of the workshop the teams presented their ideas, which ranged from ways to obtain industrial flexibility to redesigning the concept of national mobilization in a network-connected world.

“I like to say the workshop may generate 100 ideas, 80 percent of which are already being explored or done before,” Kline commented as the workshop concluded. “Ten percent of the concepts may be physically or fiscally impossible, but that’s ok because the participants are stretching the boundaries.

“It’s the remaining 10% that we are looking for; these are the seeds we plant in further research, prototyping, and experimentation to see how they mature.  And, in the last 13 years several concepts and technologies have been independently funded, taken to prototype, adopted and changed the way in which the Naval services do business.”

The workshop, funded by NPS’ NWSI, Consortium for Robotics and Unmanned Systems Education and Research (CRUSER) and the newly-established Consortium for Intelligent Systems Education and Research (CISER), will also serve as the cornerstone of the Warfare Innovation Continuum over the next nine months as a naval warfighting theme of interest for NPS capstone classes, student and faculty research projects and wargaming events.

The theme “Resurrecting War Plan Blue” harkens back to nearly a century ago, when the United States military developed a series of color-coded war plans to strategically explore hypothetical conflicts with a range of nations. Of these plans, War Plan Blue examined preparations the U.S. must make in a time of peace to respond to, sustain and ultimately triumph in war, regardless of adversary.

The United States, Kline recently wrote, is in need of a new War Plan Blue effort “to absorb initial contact, employ follow-on forces, sustain those forces, and, if necessary, mobilize the nation for an extended conflict.”

Today, the international community has once again become fractured with the resurgence of nationalism, protectionism and global uncertainty. Meanwhile, technology continues to accelerate at an exponential rate, yielding new weaponry every bit as game-changing as the steam engine or aircraft carrier was to previous generations.

“With the emergence of submarine-launched cruise missiles, hypersonic weapons, cyber warfare, and autonomous unmanned systems, the great ocean barriers may no longer provide the United States the time and distance to organize for an extended major conflict,” he said. “In an era of great power competition between technologically advanced nations, advance investment in war preparations is required – and may be the best deterrent to future war.”