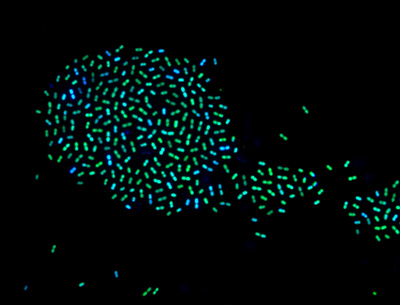 (Photo above: Researchers developed an inducible CRISPR interference system to turn off individual genes in the bacteria that cause pneumococcal pneumonia. In the bacteria in this image, the system was used to control the expression of different fluorescent colors. Credit: J. Kimmey)

Using a CRISPR interference system to study virulence genes in a mouse model of pneumonia, scientists observed surprising variability in how the disease progresses

A team of infectious disease researchers has developed a new method to identify virulence genes in Streptococcus pneumoniae, the leading cause of bacterial pneumonia. Using this technique in a mouse model of pneumonia, they were able to gain new insights into the progression of the disease and its interaction with the flu virus.

“Bacterial pneumonia is a lot more common, and more deadly, after a viral infection. Historically, a lot of the deaths during flu outbreaks such as the 1918 pandemic have been attributed to pneumococcal pneumonia,” said Jacqueline Kimmey, assistant professor of microbiology and environmental toxicology at UC Santa Cruz and co-first author of a paper on the new findings published October 28 in Cell Host Microbe.

Kimmey and her colleagues developed a new method for performing functional gene analysis to identify the genes that drive virulence in S. pneumoniae. Their method builds on the powerful gene editing technology known as CRISPR, which can be modified to selectively silence targeted genes with a technique called CRISPR interference. The researchers created a pooled library of S. pneumoniae strains in which each of the bacteria’s genes was targeted by CRISPR interference in one of the bacterial strains.

The CRISPR interference system was inducible by the antibiotic doxycycline, so the genes were not silenced until the bacteria (which were resistant to the antibiotic) were introduced into mice given doxycycline-containing feed. In addition, a genetic “barcode” on the guide RNAs used to target the silenced genes enabled the researchers to easily track each strain after infection. With a single sequencing step, they could identify which strains had survived and caused infections in the mice.

“It’s a very efficient way to shut off individual genes and find out which ones are important,” Kimmey explained.

The system also enabled the researchers to assess a crucial phase of the infection when most of the bacteria die off. Only a small number of bacteria survive this “bottleneck” and go on to cause invasive disease.

“The lungs are actually really good at clearing infection,” Kimmey said. “Even when we gave mice quite a high load of bacteria, there was a huge bottleneck, and very few bacteria made it into the blood.”

The researchers estimated that as few as 25 bacterial cells could survive the bottleneck and cause disease. They also found a surprising amount of variation in the outcome of the bottleneck, even though the mice were genetically identical and were infected through a carefully controlled protocol. The effects of the bottleneck overshadowed the gene silencing effects, resulting in little difference between the control mice and those in which bacterial genes were silenced.

“There was no consistency in terms of which strains survived, and there was huge variability in the size of the bottleneck,” Kimmey said. “We know there is a lot of variability in the clinical progression of the disease in humans, so it is very exciting to see so much variation in this highly controlled system.”

The researchers then added flu to the system, infecting the mice with type A influenza prior to introducing S. pneumoniae. In mice pre-infected with influenza, there was no bottleneck, and a relatively small dose of bacteria caused rampant infection in the lungs. This enabled the researchers to assess the effects of gene silencing on the virulence of the bacteria.

The results pointed to several genes as having important roles in pneumococcal infections, including genes identified as virulence factors in previous studies, such as the bacterial capsule genes. Surprisingly, the gene for the bacteria’s main toxin, pneumolysin, did not appear to be necessary for the development of infections. Together with other recent findings, this suggests that pneumolysin may be more important for transmission than for survival in the host, the researchers said.

A mysterious aspect of S. pneumoniae infections is that it is a very common colonizer of the upper respiratory tract without causing disease in most people.

“We really don’t know what controls that,” Kimmey said. “There seems to be a large population of people who are colonized, and normally that’s okay. But a viral infection may predispose them and increase the risk of bacterial pneumonia.”

To get a better understanding of the variable outcomes seen in this study, Kimmey said she plans to use the CRISPR interference system to study the progression of infections in greater detail. In clinical settings, variability in the progression of disease can be attributed to a wide range of factors. In this controlled study, the process of infection itself seemed to be highly variable.

“The system we developed gave us a very elegant way of showing the variability of outcomes and what seems like random variation in the course of infections, even in a controlled system,” she said.

In addition to Kimmey, the authors of the paper include co-first author Xue Liu, corresponding author Jan-Willem Veening, and coauthor Vincent de Bakker at the University of Lausanne, Switzerland; Laura Matarazzo, Laurye Van Maele, and Jean-Claude Sirard at the University of Lille, France; and Victor Nizet at UC San Diego. This work was funded by the Swiss National Science Foundation, U.S. National Institutes of Health, and the UC President’s Postdoctoral Fellowship Program.