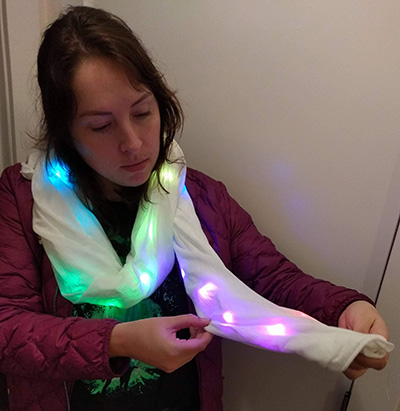 The program targets middle school girls because that is an age at which many girls begin to lose interest and confidence in pursuing computing and technical subjects in school and as career options, said Isbister, who directs the Social Emotional Technology Lab in the Baskin School of Engineering.

“A lot of it is due to social influences, because children at that age are very sensitive to what is acceptable to their peers,” she said. “Computer science has become a highly gendered domain, even though it didn’t start out that way, and a lot of girls just self-select themselves out of it.”

Studies have shown, however, that girls can become much more engaged when working on coding projects as part of a computational community and when the projects are socially relevant, Isbister said. The idea for the summer camp emerged from her team’s work on ‘social wearables,’ wearable technology designed to support and enhance social interactions. The researchers have been working with groups engaged in live action role playing (LARPing), a popular type of fantasy game in which people create characters, make costumes, and act out various fictional scenarios.

“The LARP community is interesting because of their expertise in crafting social experiences and their attitudes toward technology—they will only adopt a technology if it enhances the shared experience of the group,” Isbister explained. “We thought this was relevant to the problem of getting girls interested in computing.”

The summer camp will use an educational LARP game as a sort of test bed for the development of social wearables by the participants, who will work together on designing and modifying wearable technology to support their social interactions in the game.

In designing the Social Wearables Edu-LARP (SWEL) camp, Isbister’s team at UC Santa Cruz will be working closely with the Game Academy, which has years of experience offering classes and summer camps involving role-playing games. The Game Academy will also be running the camp sessions.

The team’s advisers include Alexandria Leckliter, who oversees UCSC’s Girls in Engineering program as K-12 STEM outreach director for the Educational Partnership Center. External evaluation of the camp’s effectiveness will be led by Jill Denner, senior research scientist at ETR.

The first year of the project will focus on prototyping and testing, with the goal of running the first SWEL camp next summer. Isbister said she hopes that by then COVID-19 concerns will have abated, although the team is considering ways to adjust their plans if needed. “The good news is we can run it outside, but I’m hoping we’ll be at least somewhat out of the woods at that point,” she said.

Part of the plan for the project is to create a SWEL “camp in a box” that can be used broadly by schools and other organizations. The components used for the wearables will all be consumer-friendly hardware that is readily available online. The team will use an iterative approach to developing the camp and the camp-in-a-box kit, running trials with outside groups and working with the external evaluator.

“Our ultimate goal is to create a dynamic social and collaborative computational experience for the girls who attend these camps, which can have lasting impact on their future engagement with computation,” Isbister said.