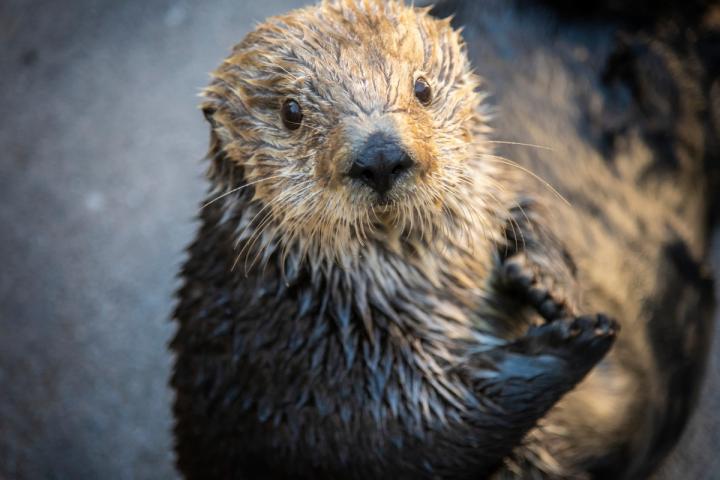 The release of the sea otter genome on the UCSC Genome Browser is the result of a study by UCLA scientists and co-authors that examined the evolutionary history and genetic diversity of sea otters, and found that sea otters have low genetic diversity. In their investigations, the researchers sequenced Gidget’s genetic code — her genome.

A genome assembly is the entirety of the species’ genetic code, produced after chromosomes have been fragmented, the genetic code in those fragments has been written down — or sequenced – and the resulting sequences have been put back together — or assembled.

The sea otter’s low level of genetic diversity is similar to other threatened species, such as the cheetah and Tasmanian devil, said investigator Annabel Beichman, a UCLA graduate student in ecology and evolutionary biology.

“While low diversity isn’t necessarily dangerous by itself, we also found elevated levels of potentially harmful variation within genes, possibly due to a history of population declines — which could impact the population going forward,” Beichman said.

The UCSC Genome Browser presents a diverse collection of annotated datasets known as “tracks” visualized graphically. These include gene-expression data and disease-association data representing the relationships of genes to diseases, as well as mappings of commercially available gene chips from Illumina and Agilent.

To see Gidget’s genome, anyone is free to check out the UCSC Genome Browser at https://genome.ucsc.edu/cgi-bin/hgGateway?db=enhLutNer1, offering visual access to genome sequence data with an experience is similar to peering at an organism’s DNA data through the lens of a microscope.

“Besides being like a microscope, it can also be similar to looking through a telescope,” said Brian Lee, a staff manager who assists scientists using the UCSC Genome Browser. “On the human assembly we have data tracks that show measurements of evolutionary conservation across over 100 species. Looking at the alignments between birds, reptiles and fish genomes and seeing coding DNA that has remained mostly unchanged for potentially millions of years is an experience similar to how powerful telescopes allow scientists to peer into the universe’s distant past.”

Initially built in 2000 by David Haussler, distinguished professor of Biomolecular Engineering at the Jack Baskin School of Engineering, University of California, Santa Cruz and Jim Kent, then a graduate student and the current director, the UCSC Genome Browser allows researchers to display different kinds of conservation data. The user can select from different tracks including primates, vertebrates, mammals among others, and see how the gene sequence they searched is conserved amongst other species.

The comparative alignments give a graphical view of the evolutionary relationships among species. This makes it a useful tool both for the researcher, who can visualize regions of conservation among a group of species and make predictions about functional elements in unknown DNA regions, and in the classroom as a tool to illustrate one of the most compelling arguments for the evolution of species.

The juxtaposition of the many types of data allow researchers to display exactly the combination of data that will answer specific research questions.

One unique and useful feature of the UCSC Browser is the continuously variable nature of the display. Sequences of any size can be displayed, from a single DNA base up to the entire chromosome with detailed annotation tracks. Researchers can display a single gene, a single exon, or an entire chromosome band, showing dozens or hundreds of genes and any combination of annotations. Zooming in allows the user to choose any region in the genome image and expand the DNA in that spot to occupy the full screen – similar to operating a microscope.

The UCSC Genome Browser would like to thank the Annabel Beichman and her colleagues and the National Center for Biotechnology Information (NCBI) for making these genomes available; as well as the Monterey Bay Aquarium, UCLA, and NSF who funded and supported the genome assembly effort. The Browser team’s software engineer Jonathan Casper led the development of Gidget’s browser and Jairo Navarro conducted the Quality Assurance and release.