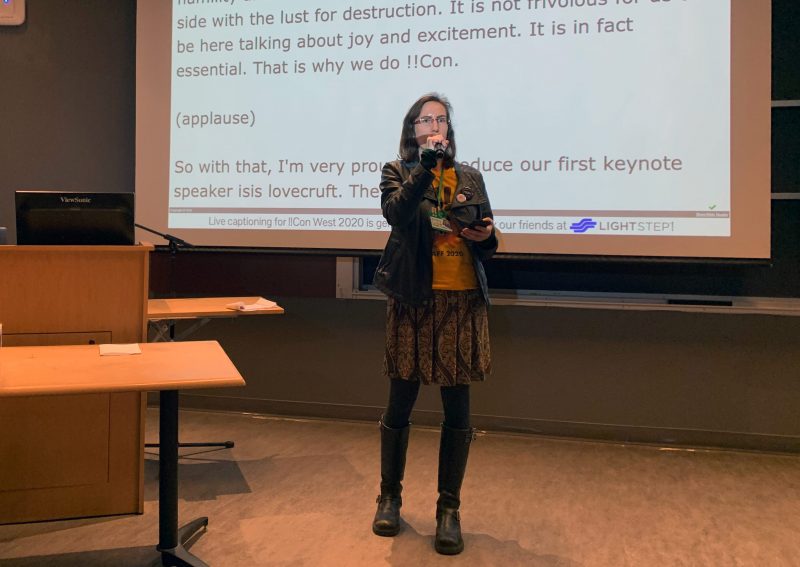 !!Con West is not your typical tech conference.

And the joy is palatable. Attendees appear excited and engaged, stopping each other in the hall to introduce themselves in person (because they already knew each other from Twitter).

In its second year, the sold-out pay-what-you-want conference was held at Baskin Engineering on the UC Santa Cruz campus, February 29-March 1, 2020. !!Con West is the west coast iteration of !!Con, which began in Manhattan, NY seven years ago. This year’s conference was comprised of 28 speakers, including keynote speakers isis lovecruft and Erin Rose Glass. The titles of the 26 lightning talks ranged from “You can weave software into hardware! And then fly to the moon!!” to “Drag makeovers, via AI.”

According to Kuper, !!Con began as a joke. “There was a family reunion event going on at the Recurse Center, and this one guy was sad that he couldn’t come. We said, “why don’t you make up a fake conference and get out of work that way.’ Then we said, ‘maybe we should actually make a conference.’ We did it in four months. Ironically, he didn’t come.”

Fast forward to now, the conference has grown in size and added a west coast event. Attendees this year came from countries around the world, including Canada, France, and Chile, in addition to the United States.

The biggest difference between the original !!Con and !!Con West is the venue, according to Kuper. “In New York, everyone who goes is on public transit, whereas here we need to give driving directions and warn people about deer and wild turkeys on the road. Some people did come on public transit, but it’s harder.”

A kind and comfortable environment

One of the most striking things about !!Con is its attention to inclusivity and representation. The lanyard table at check in is covered with colorful gender pronoun stickers to attach to our badges. Kuper begins the conference, which is closed captioned and broadcasted in entirety on youtube, by describing locations of closest gender neutral and gendered bathrooms.

Clearly a lot of effort went into making the conference, as organizer Joshua Wise called it “an equitable and representative space.”

The conference began with Wise describing the code of conduct, which is described in detail on their website. “The code of conduct is here because I would like to have an equitable space, where everyone gets to stand on the same level and see the same things. The short form is, be kind to your fellow attendees, make everybody comfortable.”

“People are at their best when you make them feel welcome, when you give them an environment where they can flourish,” said Kuper. “What a waste it would be to not provide that environment. We make sure there are pads in all the bathrooms, closed captioning for all the speakers.”

Unlike conferences that focus on the tech workplace, !!Con West highlights what tech people do for fun. According to keynote speaker isis lovecruft, designing their talk was a break from the traditional tech world. “It’s really great to see people so excited because the tech industry can be so toxic,” they said. “This was actually a very therapeutic experience, it made me realize that I do in fact love computers, just not the industry.”

Santa Cruz local Kathleen Tuite spoke on the second day of the conference in a talk titled “The surprising hacks behind my 3D reconstructed wedding cake topper.” For Tuite, !!Con helps her reconnect to her passion for computing. “It’s my second year here, and my first time talking,” she said. “It’s good to have validation about things that aren’t a priority in the eyes of big tech. It’s great to be sitting in the room feeling all the energy, especially with everything that is terrible going on in the world.”

According to Kuper, the conference was designed for this very purpose. “Wonder and humility are wholesome emotions that do not exist side by side with the lust for destruction. It is not frivolous for us to be here talking about joy and excitement. It is in fact essential. That is why we do !!Con.”