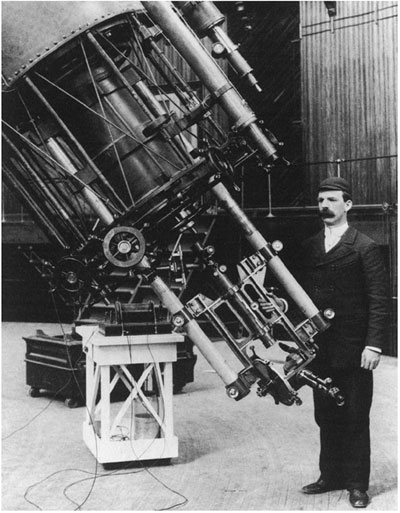 (Photo: William Wallace Campbell served as director of Lick Observatory from 1901 to 1930.  He became a member of the full-time staff at Lick in 1891. Photo courtesy of Mary Lea Shane Archives, Lick Observatory)

UC Santa Cruz has received a gift of $1 million to establish the William Wallace Campbell Director’s Fund for Lick Observatory in the University of California Observatories (UCO).

Born on a farm in Hancock County, Ohio, in 1862, Campbell got interested in astronomy as an undergraduate at the University of Michigan, where he earned his B.S. in 1886. Lick Observatory began operations in 1888, and Campbell soon began spending his summers there. In 1891 he was invited to join its full-time staff.

A pioneer of astronomical spectroscopy, Campbell also spent decades measuring the radial velocities of stars to establish the spatial drift of the solar system. He led a 1922 Lick Observatory expedition to Australia to capture images during a solar eclipse that were used as final confirmation of Einstein’s general theory of relativity.

“William Wallace Campbell was an extraordinary man, and it’s a deep honor to receive this gift in his name. Lick Observatory would not be the vibrant scientific facility it is today without the ongoing donor support of our community,” said UCO Director Claire Max, the Bachmann Professor of Astronomy and Astrophysics at UC Santa Cruz.

The William Wallace Campbell Director’s Fund will be used to support the UCO Director’s priorities at Lick Observatory. The endowment continues Campbell’s legacy of leadership and represents a major step toward establishing the long-term financial sustainability of the observatory.

Lick Observatory is located on the summit of Mt. Hamilton in the Diablo Range east of San Jose. Founded in 1888, Lick Observatory is at the forefront of astronomical research as an active research facility. It is operated by the University of California Observatories (UCO), a multi-campus research unit that serves eight UC campuses and is headquartered at UC Santa Cruz. More information is available online at www.ucolick.org.