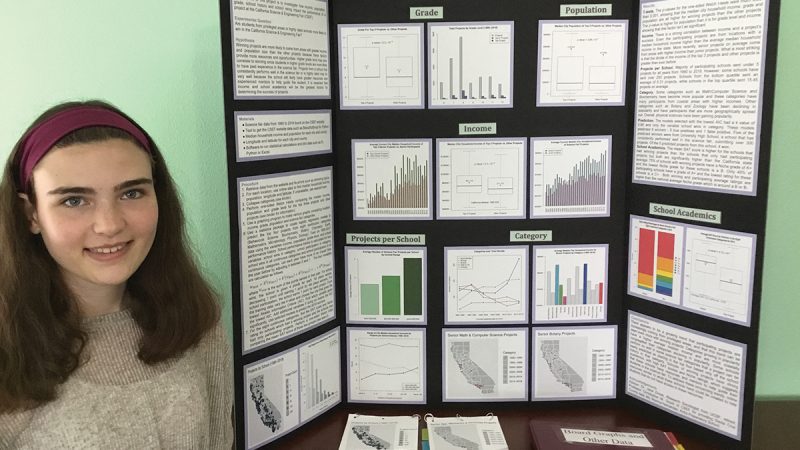 (Photo above: Kirby student Rinoa Oliver in national spotlight for showing the boost that wealthy kids get in science and math.

A world once comprised of baking-soda volcanoes and potato-powered light bulbs, the science fairs of today are filled with fierce innovation and competition.

They’re also—as 8th grader Rinoa Oliver learned through a recent math and science project—replete with privilege, now more so than ever.

The 13-year-old got the inspiration for her project at the awards ceremony for last year’s California state science fair, where she spotted a troubling trend. “I noticed a lot of the winning projects were from wealthier areas, such as Orange County, and I wanted to investigate further,” she says.

Rinoa started analyzing 29 years of California Science and Engineering Fair results, and found that students from wealthier areas are far more likely to produce winning projects than those from poorer regions. Plus, schools who’ve produced winners in the past are more likely to do so again.

Rinoa’s work is gaining serious recognition. She beat out thousands of applicants to earn a top-30 spot in this year’s Broadcom Masters national middle school STEM competition for projects in science, technology, engineering and math. Later this month, she’ll travel to Washington, D.C. with the other finalists to compete for over $100,000 in prizes, and the title of the top young STEM student in the country.