Studying robotic and autonomous vehicle systems in the presence of uncertainty

Posted on May 28, 2019 by Sara Isenberg in Featured, Santa Cruz Tech Ecosystem, Video 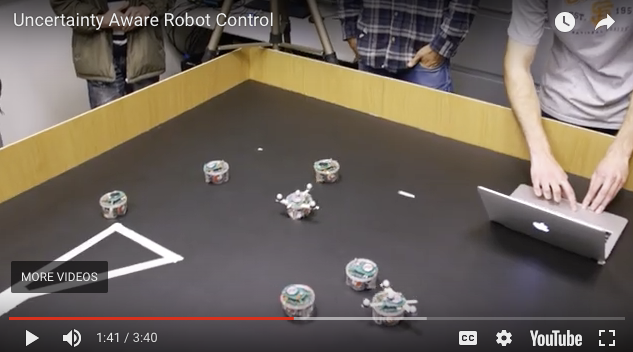 As robots and autonomous vehicles escape the confines of factory floors and other controlled environments, they find themselves confronted with uncertainty. UC Santa Cruz professor of electrical and computer engineering Dejan Milutinović and his student researchers design robots that are aware of — and can respond to — this uncertainty.

“The exciting thing about this kind of research is that it combines concepts and reasoning from all kinds of disciplines: statistical physics, mechanics, and control theory,” Milutinović said. “It’s very relevant to the future of autonomous systems and robotics.”

Milutinović is an internationally recognized authority on the modeling and control of stochastic dynamical control systems. He received his Ph.D in 2004 from the Instituto Superior Tecnico in Portugal and joined the UC Santa Cruz faculty in 2009, winning a Hellman Fellowship in 2012 and 2013.

There are several projects underway in Milutinović’s lab. In one way or another, all of the projects address the question, “How does the system behave when exposed to environmental uncertainty?”

Ph.D. student Megan Biovin works with haptics. “We as humans use haptic feedback to help determine where our bodies are located. Vision often isn’t the most reliable sense when it comes to placing objects, so incorporating touch and other senses into robotics can really help them manipulate objects.”

Ph.D. student Jay Ryan Roldan creates methods of optimizing clearance for tasks, especially for surgical robotics. “It’s important to optimize the amount of space you have to work with,” he said. “Imagine soft-tissue deforming during a surgery, we want to be able to have as much clearance as possible to minimize the amount of space we need to use during a procedure.”

“Our unofficial name (given to us by the students) is the desktop robotics lab,” Prof. Milutinović said. Small robots can be programmed to mimic the behavior of much larger systems.

Alexey Munishkin, a Ph.D. student in Milutinović’s lab, uses e-puck table-top robots to simulate the behavior of autonomous aerial vehicles in flight. He’s looking for ways that multiple autonomous aircraft can navigate without colliding. “Anything that might have some uncertainty involved with it, like collision avoidance; obstacle avoidance in a multi-agent system.”

Marco Carmona, a Ph.D. student in computer engineering, uses a 3D-printed tricycle to implement and test stochastic control methods for autonomous driving. “My research is on autonomous driving, specifically on anticipating uncertainty in the vehicle’s perception.”

Leo Chen, who is working on his MSc degree is also using small robots to test autonomous driving. He uses a small, off-the-shelf robot to test his programs. He’s taken the video feed from its “eyes” and created a program that allows it to navigate a track and stop at stop-lights.

Iris Huang, who is working towards an MS in computer engineering, models queue dynamics. “At major airports planes have to wait at the gate because of air-traffic congestion, we hope our research will help relieve some of it.”