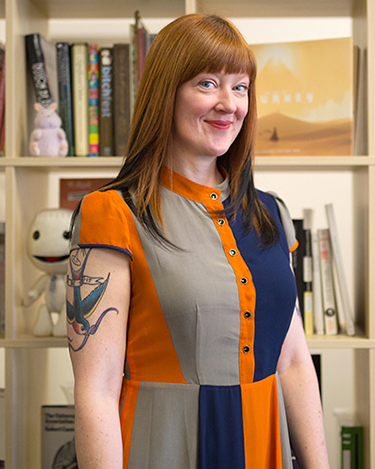 Associate arts professor Robin Hunicke is set to host this year’s Game Developers Choice Awards, which will take place on March 21 during the 2018 Game Developers Conference in San Francisco.

Hunicke is director of art and design for the Games and Playable Media B.A. program at UC Santa Cruz, as well as the acting director of the campus’s Digital Arts and New Media M.F.A. program.

She is also co-founder and CEO of the independent game design company, Funomena. Last fall, the company released Hunicke’s acclaimed PC and VR game, Luna, which has been nominated for a 2018 Independent Games Festival (IGF) award for Excellence in Visual Art.

“I’m thrilled to return as the host of this year’s Game Developers Choice Awards, and the whole Luna team is over the moon about our IGF nomination,” said Hunicke. “One of the best things about both the IGF and the GDC awards is that they come from the development community–a global network of creatives who work in game design, programming, art, sound design and production.”

“Making games takes so much time and effort, and pushing into new design territories, like Virtual Reality, also increases the challenge,” she added. “To be recognized for achievement this year, alongside so many other amazing games is really outstanding, and lets us know that our work in this area is appreciated by our peers.”

Hunicke joined the arts faculty at UC Santa Cruz in 2014 to develop and promote undergraduate and graduate education that explores games as a medium of critical, social, and expressive artistic practice.

“My work on games focuses on how systems, and the rules that create those systems, can create unique, specific feelings in the player,” Hunicke noted. “Luna is a natural extension of this work–inviting players to relax, explore, and experience a tactile environment in VR.”

“The curriculum I’ve worked on at UCSC is all about giving students a chance to craft games that investigate this same principle, while also learning how to collaborate creatively across disciplines,” she added.

“Teamwork, creativity, attention to detail while keeping the big picture in mind: this is how we solve all sorts of problems. Game design is system design, and system design touches all aspects of society–from politics and civic participation, to the environment and how we develop new technologies.”