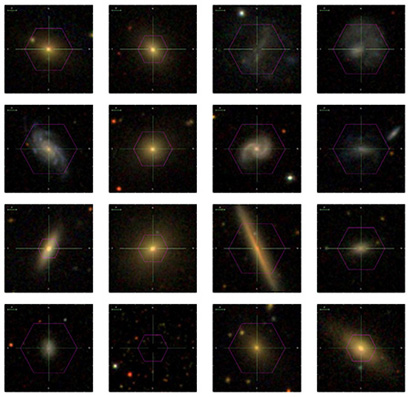 (Images above: The MaNGA data set will eventually include more than 10,000 nearby galaxies, and the survey is already more than half way toward that goal. Credit: SDSS/MaNGA collaboration)

The latest data release from the Sloan Digital Sky Survey (SDSS) includes observations revealing the internal structure and composition of nearly 5,000 nearby galaxies observed during the first three years of a program called Mapping Nearby Galaxies at Apache Point Observatory (MaNGA).

MaNGA uses a technique called resolved spectroscopy to study galaxies in much greater detail than previous surveys. Spectroscopy is a powerful tool for astronomers, yielding a wealth of information by measuring how much light an object emits at different wavelengths. In the past, astronomers typically acquired just one spectrum for each galaxy, but resolved spectroscopy (also called integral field spectroscopy) obtains hundreds of separate spectra covering every location within the galaxy.

“Resolved spectroscopy allows us to dissect a galaxy and study its internal composition and the motions of its stars and gas,” explained MaNGA principal investigator Kevin Bundy, an associate researcher at UC Observatories and adjunct professor of astronomy and astrophysics at UC Santa Cruz.