Urban or rural, the need for broadband speed is the same for all in the Monterey Bay region

To run a business, do homework and enjoy the benefits of our digital economy, broadband service that runs at 100 Mbps download/20 Mbps upload speeds is a necessity for everyone. That’s the conclusion of a year-long study by the Monterey Bay Economic Partnership (MBEP) and the Central Coast Broadband Consortium.

The report was presented on Friday at MBEP’s 2018 State of the Region event in Seaside. It was based on the work of the broadband leadership team recommended by participants at the 2017 conference and recruited by MBEP earlier this year. The team conducted a survey of residents and businesses in Santa Cruz, San Benito and Monterey counties.

The key finding is that broadband needs are the same whether people live or work in a well-served urban area or a poorly – or even unserved – rural community.

The result was unexpected. The study’s underlying hypothesis was that the region’s diverse economy and communities would have an equally diverse range of broadband needs. As it turned out, there was little difference in the responses from high tech, agricultural or home-based business sectors, or from consumers anywhere.

In retrospect, the findings made perfect sense: a rancher in Bitterwater uses the same cloud-based business tools as a game developer in Santa Cruz, their families watch the same video programs, and their kids do the same homework and take the same online tests.

Federal and state broadband standards do not meet that need. Broadband subsidy programs run by the federal government set 25 Mbps down/3 Mbps speeds up as a minimum, although providers who deliver significantly slower service in rural areas can still receive funding. California’s primary broadband subsidy program, the California Advanced Services Fund, considers speeds as low as 6 Mbps down/1 Mbps up to be sufficient for urban and rural communities alike. 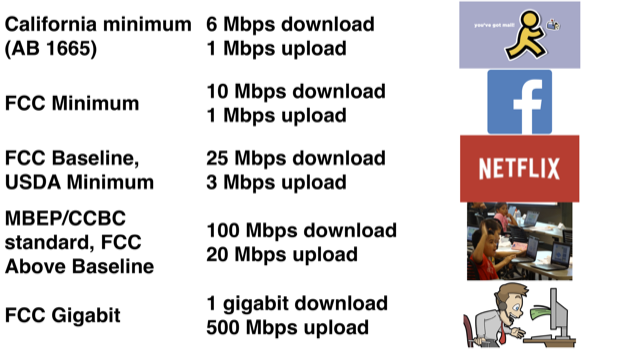 50% of respondents in the consumer survey stated that they would like to have download speeds of 100 Mbps or more. 66% of consumers said they were willing to pay $40 to $99 a month for their ideal speeds.

The MBEP survey data was backed up by a separate broadband needs survey run by the County of Santa Cruz and quarterbacked by broadband leadership team member Zach Friend, who is a Santa Cruz County supervisor.

The question addressed at this year’s conference was how do we achieve the goal of making 100 Mbps down/20 Mbps up broadband service ubiquitous in the region? Participants, who represented local governments, Internet service providers, businesses and non-profit organizations, identified better access to capital, greater public-private cooperation and proactive local broadband development policies as the team’s 2019 objectives.