Surfnet Takes Another Try in the Santa Cruz Mountains 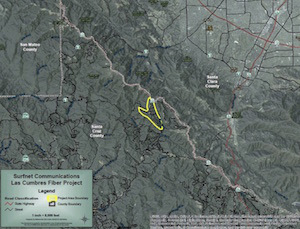 Surfnet takes another try in the Santa Cruz mountains

Los Cumbres is a private community in the Santa Cruz mountains with old-style DSL service. Surfnet Communications, a wireless Internet service provider in the area, is asking the California Public Utilities Commission for a $730,000 grant and a $243,000 loan from the California Advanced Services Fund to build a fiber to the home system there.

The project would reach something like 180 homes, at a total cost of $1.2 million, with the balance paid by the Las Cumbres homeowners association and Surfnet. That comes to $6,700 per household overall, with the CASF grant covering $4,000 of it. Service to individual homes will be via direct fiber connections, but the system will be fed by a wireless link, which would have less overall capacity.

It’s the second time that Surfnet has applied for CASF subsidies in the Santa Cruz mountains. The first was in 2013 for neighborhoods to the southeast of the current proposed project area. Surfnet withdrew, though, after Comcast decided to extend its existing network to cover those homes, a month after the CASF application was filed. Prior that, local residents had been clamoring for years for Comcast to build out to them.

The Los Cumbres project area is several road miles from the Comcast’s nearest system, so there’s less likelihood of a repeat preemption. But the local phone company is Verizon. As of a year ago, it claimed to offer DSL service there, at levels below the 6 Mbps download and 1.5 Mbps upload minimums set by the CPUC. But Verizon told the CPUC at a hearing in July that it had plans to upgrade its backhaul capacity, and the network diagrams it submitted backed up the claim that it will be upgrading its fiber infrastructure in the Santa Cruz mountains. Whether that’ll help boost speeds on its antiquated copper lines remains an open question.

Frontier Communications is trying to buy Verizon’s wireline phone systems in California and has generally pledged to upgrade broadband infrastructure once it takes over, but it’s made no specific promises regarding where or when those improvements will happen. As a rule, the CPUC doesn’t take future plans into account when deciding whether an area is eligible for subsidies. If Verizon or Frontier want to block Surfnet’s grant application, objections would have to be based on service that’s actually available.

Tellus Venture Associates assisted Surfnet with its first project in the the Santa Cruz mountains, but is not involved in the current one. Even so, I’m not a completely disinterested commentator; take it for what it’s worth.