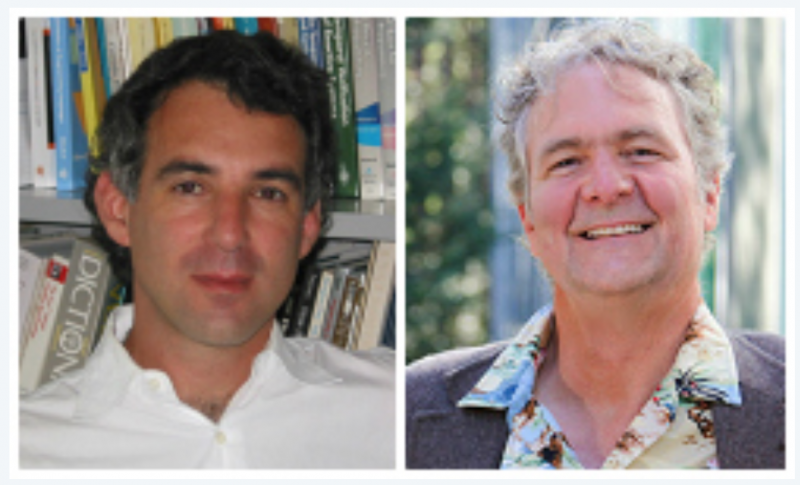 (Photos above: Professors Martin Abadi, left, and David Haussler, have been elected to the National Academy of Engineering. Contributed)

“We’re very pleased that the outstanding contributions of David Haussler and Martín Abadi have been recognized by the National Academy of Engineering,” said Alexander Wolf, dean of the Baskin School of Engineering. “The work of these two faculty members exemplify the power and importance of engineering in our lives. Professor Haussler’s work has transformed the field of genomics, and Professor Abadi’s research helped form the foundations of computer security.”

Haussler, the scientific director of the UC Santa Cruz Genomics Institute, was recognized by the academy “for developments in computational learning theory and bioinformatics, including first assembly of the human genome, its analysis, and data sharing.” He is a pioneer in genomics research and an international leader in efforts to advance genomic medicine. Haussler’s team, driven by then graduate student Jim Kent, posted the first publicly available assembly of the human genome sequence online in 2000 and subsequently developed the UCSC Genome Browser, a widely used tool for biomedical researchers. His group’s work in cancer genomics includes collaborations with cancer researchers at medical centers nationally on efforts to discover molecular causes of cancer and pioneer a new personalized, genomics-based approach to cancer treatment.

A Howard Hughes Medical Institute (HHMI) investigator, Haussler has received many awards and honors for his work, including the 2015 Dan David Prize, the Weldon Memorial Prize given by the University of Oxford, and the ACM/AAAI Allen Newell Award. He is a member of the National Academy of Sciences and American Academy of Arts and Sciences and a fellow of the American Association for the Advancement of Science and the Association for the Advancement of Artificial Intelligence. Haussler joined the UCSC faculty in 1986.

Abadi was recognized by the academy “for contributions to the formal theory of computer security.” His research on computer and network security, programming languages, and specification and verification methods includes contributions to the design and analysis of security protocols and to the foundations of object-oriented programming languages. A fellow of the Association for Computing Machinery, Abadi has been recognized by the ACM Special Interest Group on Security with its Outstanding Innovation Award and by the ACM Special Interest Group on Operating Systems with a Hall of Fame Award.

Abadi joined the UCSC faculty in 2001 and retired in 2013. He is currently a principal scientist at Google.